21 Most Extreme Comparisons You've Ever Seen

21 Most Extreme Comparisons You've Ever Seen 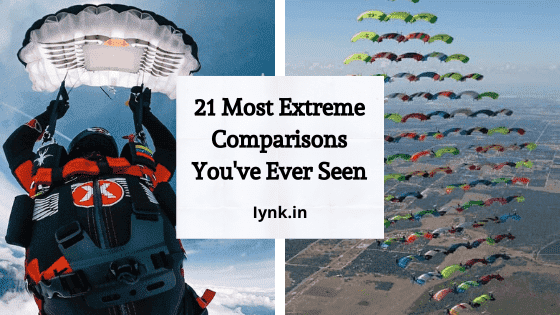 It’s a competitive world out there, eh? A global rat race for the title of the tallest, biggest, fastest – you get it. How about I make the most unusual comparisons and see where you can find record-holders of all kinds?

The world’s fastest roller-coaster is in the Ferrari World theme park in Abu Dhabi, UAE. The thing takes just 5 seconds to reach its top speed of 150 mph. You complete the 1-mile track in just over a minute and a half! And then you barf. 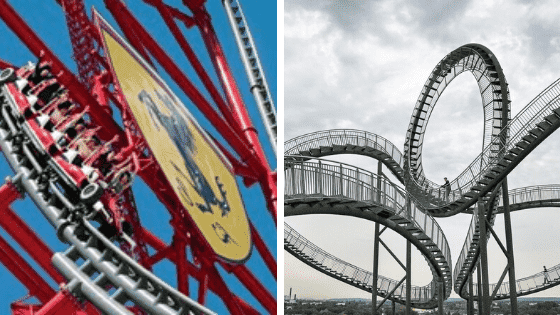 The slowest roller-coaster in the world is in Germany – and it’s a walkable one! Yep, your speed depends on how fast you can climb the steps of the 69-ft-tall structure! There’s a loop and everything!

The biggest sports stadium in the world is in North Korea – it can seat 114,000 people, which is the entire population of Springfield, Illinois. 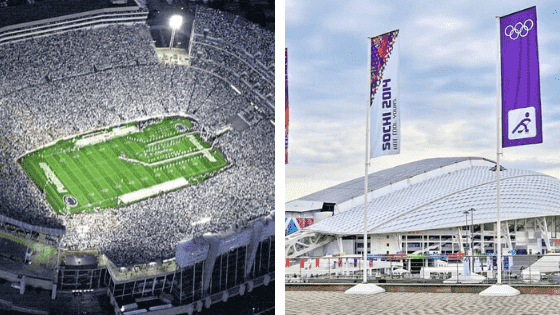 To see the world’s smallest stadium, just look at your typical foosball table! Ok, fine, if we’re going by capacity, there are plenty that ties with 40,000 max – Russia’s Fisht Olympic Stadium, Rentschler Field in the US, Japan’s Ōita Bank Dome, to name just a few.

Venezuela’s Jeison Orlando Rodríguez Hernández has the largest shoe size today. He wears an unimaginable U.S. size 26. (The average for men varies from 9 to 12.) 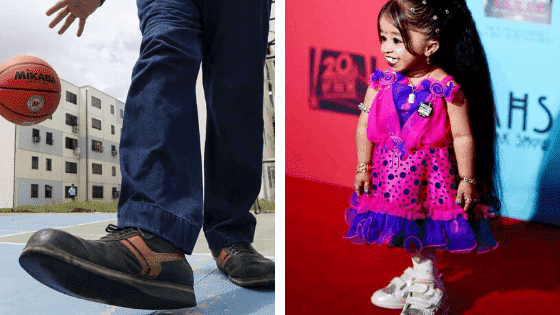 The tiniest adult shoes are custom-made for Indian actress Jyoti Amge, the world’s smallest woman. She’s just over 2 ft tall, and her shoe size is about a 2…in the infants’ department!

The biggest private house in the world is a 27-story personal skyscraper that belongs to our Indian businessman Mukesh Ambani. The Antilia is 550 ft tall, almost as tall as the Washington Monument. 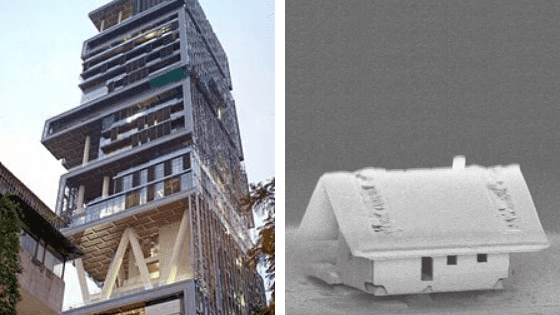 The world’s tiniest house was built by nanorobotics researchers in France. The itsy-bitsy construction is so small that it wouldn’t even fit a mite! And still, the house has 7 windows, a chimney, and a tiled roof!

Porcelain Palace, the largest public restroom in the world, is in Chongqing, China. It’s not a single bathroom, but a gigantic 4-story, 32,000-sq-ft complex with 1,000 toilets! Hey if you’re there, mention my name and you’ll get a good seat. 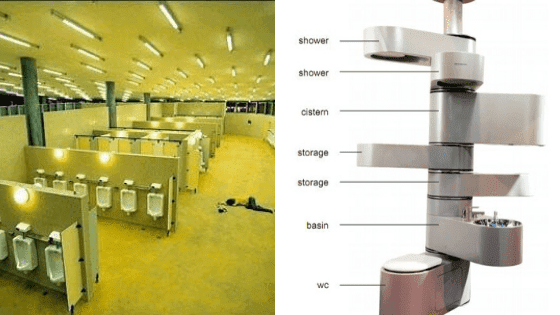 The most compact loo in the world has to be Britain’s futuristic-looking Vertebrae Vertical Bathroom. It consists of 7 units (or modules) that can be rotated with a push. There’s 1 commode, a sink, the toilet’s tank, 2 showers (one a bit higher than the other), and 2 storage drawers.

The fastest train in the world is Shanghai Maglev. It runs along a high-speed magnetic levitation line at a max speed of 268 mph! 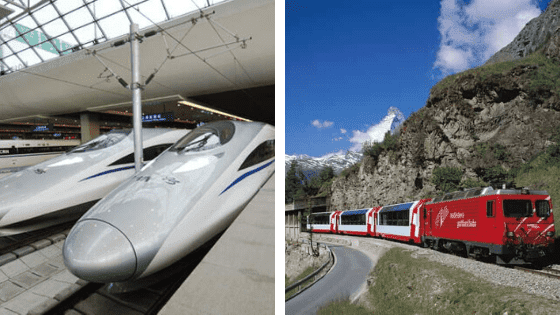 The most expensive commercially available pizza in the world costs $2,700 (or $250 for just 1 slice!) and is sold in an upscale Italian restaurant in New York City. Black squid ink dough sprinkled with one of the most expensive kinds of cheese in the world, caviar, and 24K gold leaves. Would you be willing to eat that much money??? 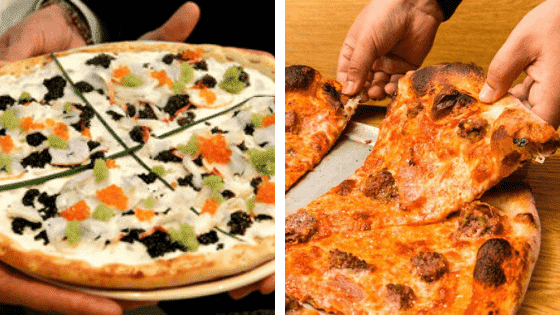 And if we talk about the US, you can find the cheapest plain pizza in… Alaska! There, you’ll pay about $7.25 for a large one.

The biggest dog in the world (if we talk about its weight) was Cloe, a Mastiff that weighed 365 lb, as much as a full-grown reindeer! Cloe lived in Tibet back in the ‘80s. 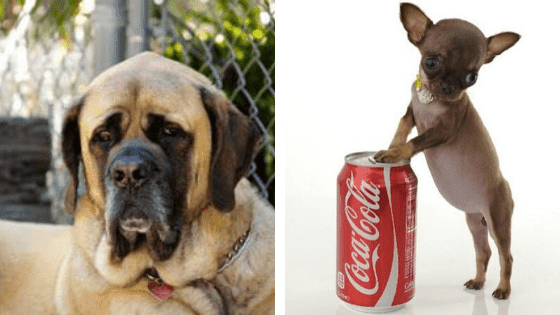 The smallest living dog is Milly, a Chihuahua from Dorado, Puerto Rico. When the tiny thing was born, she didn’t even weigh 1 ounce and could fit in a teaspoon! Now, this itsy-bitsy pooch’s height is just under 4 inches.

The longest outdoor escalator and moving walkway system is in Hong Kong. The Central-Mid-Levels escalator is 2,600 ft long and goes just one way at a time depending on rush hour. 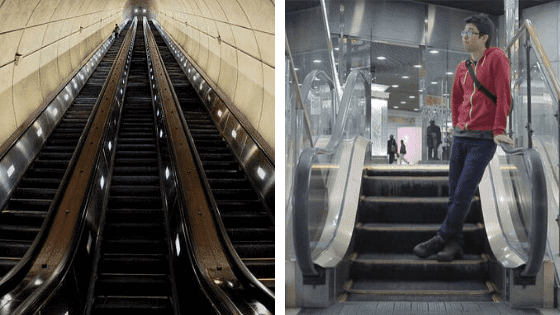 As for the shortest escalator in the world, it’s in the basement of More’s Department Store in Kawasaki, Japan. It has only 5 steps and is just over 2½ ft long. 10.

The loudest city in the world is Mumbai, India. Its noise level is more than 100 decibels, which is almost as loud as a chainsaw! 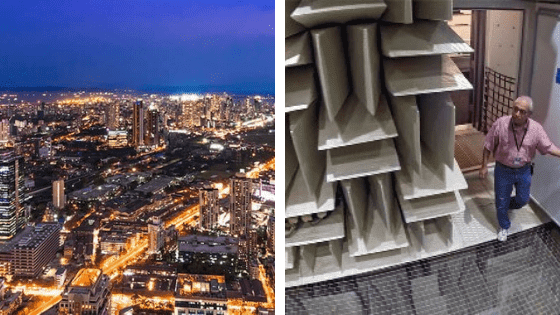 The world’s quietest place is a room in a Microsoft research lab in Redmond, Washington state. It’s so eerily quiet that nobody can stay there for more than 45 minutes at a time. Supposedly, you can hear your own heartbeat!

If you want to see the tallest building in the world, you’ll need to book a trip to Dubai. The Burj Khalifa is a jaw-dropping 2,720 ft tall, which makes it 2 times taller than the Empire State Building. 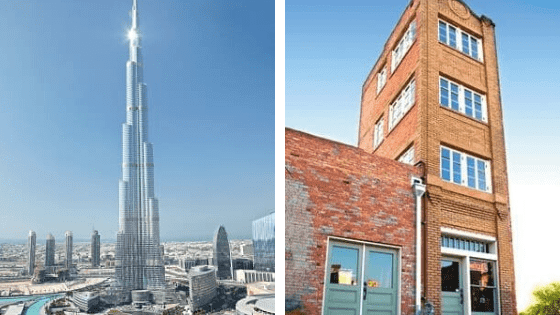 The “world’s littlest skyscraper” is the Newby-McMahon Building in Wichita Falls, Texas. It’s just 40 ft tall (roughly the height of a telephone pole) and got the nickname because it looks like a thin column.

Next to the Burj Khalifa, there’s the world’s tallest hotel, the JM Marriott Marquis Dubai. This impressive construction is 1,165 ft high, which is even taller than the Eiffel Tower! 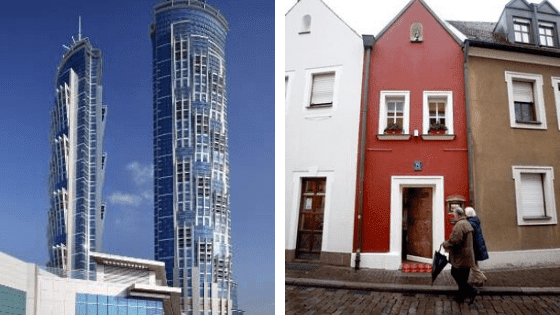 And the world’s smallest is Eh’häusl it’s in Bavaria, Germany. The building is a mere 8 ft wide and has a floor space with square footage not much more than 3 parking spaces. No wonder the hotel can’t accommodate more than 2 guests at a time!

The tallest bridge in the world is the Millau Viaduct in Southern France. Its maximum point soars at 1,125 ft above the ground, which is — really high for a bridge. 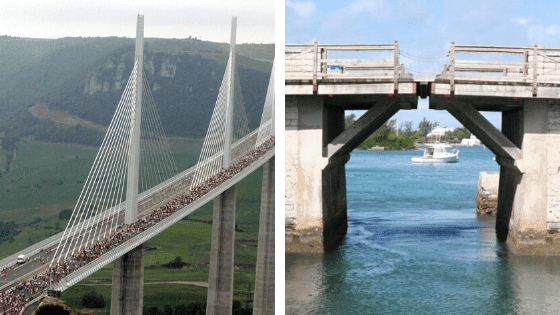 The smallest drawbridge in the world is in Bermuda. There, Somerset Bridge connects Somerset Island with the mainland. The length of the bridge is a little over 2½ ft.

14. The most expensive/cheapest private jet

The world’s most expensive private jet is a Boeing 747-8 VIP. It originally cost $358 million, but customization took the total price up to $558 million. 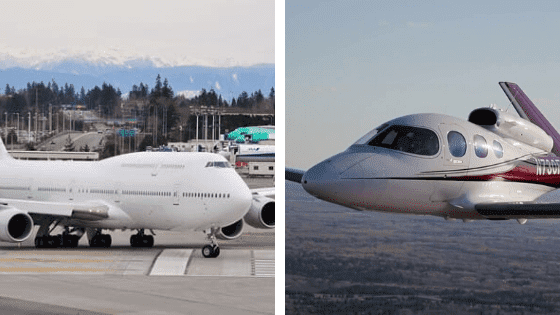 As for the one with the lowest price tag, it’d be the small Cirrus Vision Jet that’ll set you back “just” $2 million.

The biggest school in the world is in Lucknow, India. It’s the City Montessori School, where you’ll find almost 40,000 students and well over 2,000 teachers! 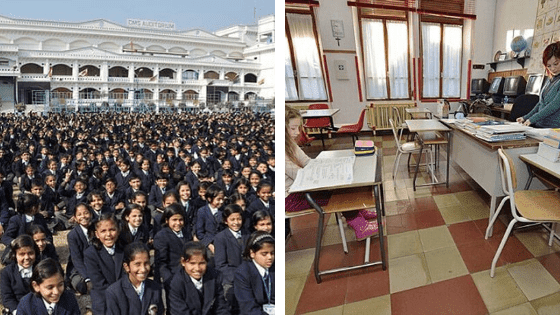 The title for the smallest goes to an elementary school in the teeny town of Alpette, Italy. In 2014, it was attended by just one 8-year-old student.

The largest art museum in the world is the Louvre. You’ll “Lourve” to see it! The Parisian landmark covers a total area of almost 783,000 sq ft – that’s over 13 football fields. 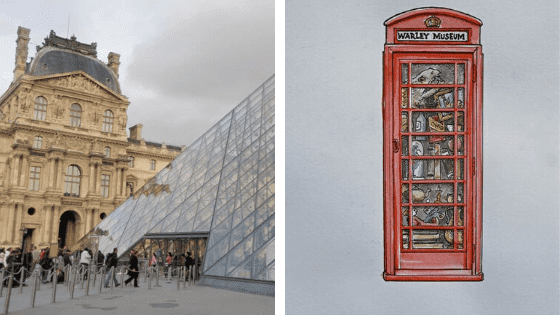 The world’s smallest museum is in West Yorkshire, England. The Warley Museum used to be a phone booth, hence why this museum can only have one visitor at a time! It also changes exhibitions every 3 months!

The largest plant in the world grows in The Sequoia National Park in California. It’s a tree nicknamed “General Sherman,” and the giant is 271 ft tall, almost as tall as Statue of Liberty 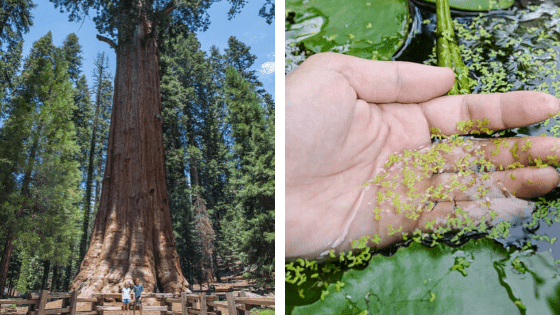 Duckweed is the world’s smallest flowering plant. The thing is smaller than a grain of sand and has a tiny root with 1 or 2 leaves. The plant flowers every year and even produces a microscopic fruit!

The Earth’s slowest animal is the three-toed sloth. Its maximum speed is 15 ft per hour! That’s why these animals don’t usually wander further than 100 ft a day and are pretty much stuck in one place. 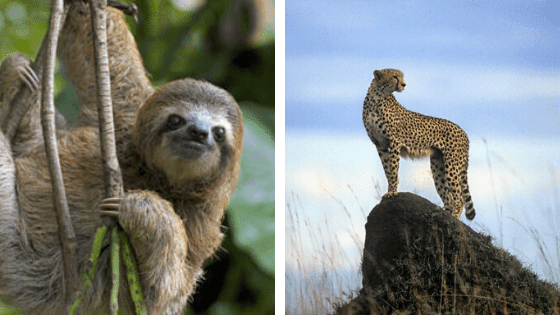 The world’s fastest land animal is the Cheetah. Its speed can reach 75 mph (that’s 26,400 times faster than the sloth), and the feline can go from 0 to 60 in less than 3 seconds!

Venezuelan-born stunt performer Ernesto Gainza Medina used the smallest parachute in the world for his 2014 jump in Dubai. His parachute’s canopy was just 35 sq ft (that’s about the same as 3 bath towels sewn together)! 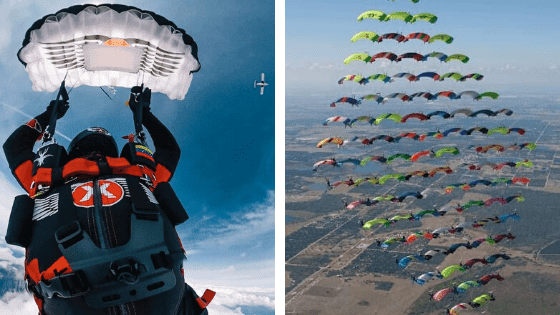 The world’s most massive canopy FORMATION was created by 100 skydivers who linked up mid-air above Florida. Doing so, their combined canopies were as big as a Boeing-747. If just one skydiver had made a mistake, all the participants could’ve crashed into each other, which wouldn’t have been good, let’s just put it that way…

20. The smallest/largest reproduction of a printed book

The world’s smallest reproduction of a printed book is “Teeny Ted from Turnip Town.” The thing is etched on a microchip the width of a human hair! It’s impossible to read this book without a scanning electron microscope. 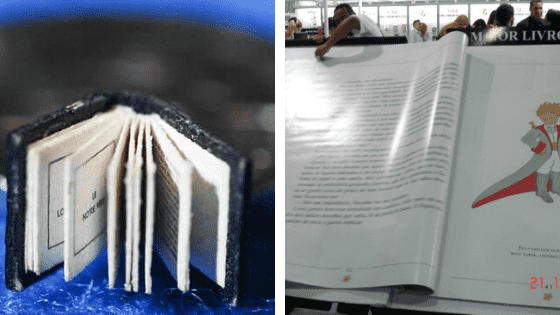 The largest published book is “The Little Prince.” This record-breaking edition is almost 7 ft tall and over 10 ft wide when open! That’s over 200 times bigger than the book’s typical copy!

The biggest statue of the world is none other than "The Statue of Unity" The Statue of Unity depicts Sardar Vallabhbhai Patel (1875–1950), a leading figure in the nonviolent Indian Independence Movement, This colossal statue stands on the isle of Sadhu-Bet in River Narmada, at Kevadia, District Rajpipla in the Indian State of Gujarat. The Statue of Unity is an iconic 182-meter-tall. 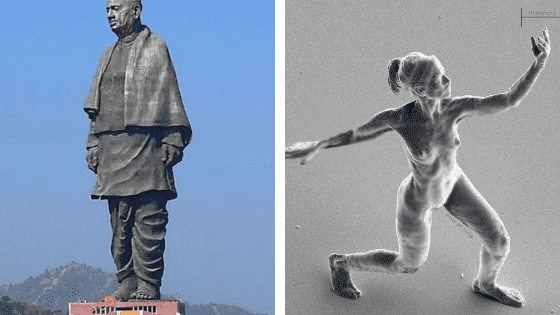 One of the world’s smallest sculptures has been accidentally crushed by a photographer’s finger, leaving the artist who created it shocked. Jonty Hurwitz, from Hampshire, uses a high-tech process called nano-painting to craft detailed representations of the human form in miniature. Some of his pieces are just 100 microns tall and so tiny that they cannot be seen by the human eye without a microscope. And that’s all I got.

3. 18 Things Designed for a Different Purpose

6. 59 Small Business Ideas for 2020 that can be Started in very Little or No Time


If you enjoyed reading "21 Most Extreme Comparisons You've Ever Seen" then please share and do comment about your thoughts on this. You might see a bell icon on the left bottom side of your screen (If not simply open iynk.in in any browser), just click on it and subscribe for more future updates and important feeds. Stay informed @Information You Need to Know. 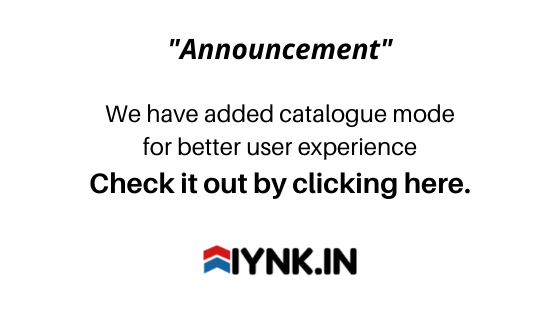