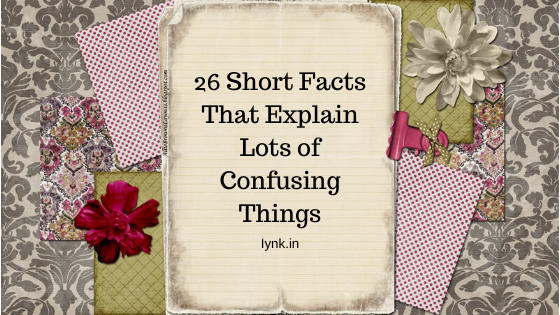 Just when you think you have this world figured out, all these questions pop up in your mind: why do car rides and rain make you sleepy? Why do airplanes have a hole in the tail? And which water extinguishes fire better, cold or hot? Those answers and plenty more coming your way!

1. Storm clouds may seem to turn dark, but it’s just an illusion. Thin clouds on a sunny day let the light through and scatter all the colors of the light spectrum. This makes us perceive the clouds as white. But the thicker clouds are and the more water they contain, the less light they transmit. Thus, they look darker.

2. Leaves don’t really change colors – they just lose their green pigment. The green usually masks the others (red, orange, yellow), so without it, those warmer hues become visible. And leaves lose this green pigment (chlorophyll) in the fall because there’s less sunlight the chlorophyll can turn into food.

3. Your own body makes bug bites swell and itch! When a mosquito breaks your skin, your immune system perceives the insect’s saliva as a foreign substance and starts making histamine. That stuff sends more blood to the bite, which causes the area to swell. Histamine also sends a signal to the nearby nerves, making you itch!

4. Zebras probably have their stripes as protection from bug bites. The stripes seem to dazzle the insects, and they can’t make a controlled landing. They either come in too fast and try to avoid the collision at the last moment, or they bump into the zebra and bounce off.

5. Most salt in oceans and seas comes from land. Rainwater, which is a bit acidic, flows over rocks and erodes them. The water collects the dissolved salt and other minerals, but it’s still drinkable at this point! Once it gets to the ocean, some minerals get removed from the water, but not the salt. Additional saltiness comes from underwater volcanic activity and hydrothermal vents.

6. Rain makes you drowsy because the sky is overcast, and without sunlight, your body produces melatonin – the very hormone that makes you sleepy at night. The rhythmic rain sound is comforting and creates so-called “pink noise,” which decreases your brain activity and improves your sleep quality.

7. The ocean isn’t blue, per se – it just seems like it. Its trademark blueish hue appears because the water absorbs all colors from the warmer part of the light spectrum – yellow, orange, and red. This works like a filter that leaves behind the blue-green color we can see.

8. Your dog licks you because it makes them feel good! It releases endorphins in the animal’s body, making your pooch feel safe, comfortable, and happy. It also relieves most of the stress your pet feels. Plus, licking is one of the ways your doggie can show you affection.

9. Cats regularly lick themselves to prevent skin oils from gathering on their fur. But it also makes their coats less waterproof than, say, a dog’s. That’s why when cats get wet, their fur becomes very heavy, and they don’t like it one bit!

10. Your stomach “growls” when you’re hungry because your digestive muscles are contracting to sort of warm-up in preparation for a coming meal. They continue to contract even after you eat. You just can’t hear it anymore because the food in your stomach is muffling the sound.

11. No one knows for sure why we call it Black Friday. Probably because stores now open in the middle of the night, but originally, it was likely used to describe all the heavy traffic happening on this day.

12. Cats love boxes so much because they make great hiding places. No predator can sneak up on them from behind, yet your cat can still observe its surroundings without being seen. The same goes for high places on top of tall furniture! (And, no, your cat’s instincts don’t care if there aren’t any real predators in your house!)

13. Dogs kick their legs when you rub their belly thanks to the so-called scratch reflex. That perfect spot your canine loves so much is full of nerves that go straight to the spinal cord. When you stimulate them, it sends the leg muscles an order to get rid of the irritation. By the way, it’s a reflex, so your dog is probably as puzzled as you are when its leg starts moving on its own!

14. Driving already makes you drowsier after 15 minutes into your trip. The reason is your seat vibrating at low frequencies, lulling your body and brain. And in half an hour, you can start having problems with alertness – even if you’re well-rested! Unless you don’t get drowsy in the car. In that case, care to share your secrets down in the comments?

15. Flamingos turn pink because they live on a certain kind of blue-green algae and brine shrimps. This diet contains a natural pink dye that affects the birds’ coloring. But originally, all flamingos are born with gray feathers!

16. As people get older, their hair follicles start to lose pigment cells. That’s why their hair gets more and more silver, white, or gray. But this process doesn’t just happen because of age – people can start losing their hair color at any stage in life!

17. You ever noticed the hole in the rear end of an airplane? It’s connected with the aircraft’s smallest engine that sits in the back of the tail. It provides the power necessary to start the main engine. It also powers up the cabin electronics until the main engines take over.

18. A comet’s tail is created by the Sun. Its heat turns some of the comet’s material into vapor and releases dust particles trapped in the ice. Then, solar wind and radiation pressure blow both the dust and gas away from the comet’s nucleus. It creates not one but two tails: a gas and a dusting one!

19. Most big space objects like planets and stars are round because of gravity. It pulls all the material from the edges toward the center. It’s equal around the entire object, smoothing out jagged angles on all sides. But if a space body is too small, like an asteroid, its mass and gravity aren’t strong enough to form a spherical shape.

20. The temperature of the water you use to extinguish a fire does matter. And surprisingly, hot water can put out the flames faster than cold. Coldwater won’t start working until it absorbs enough heat to achieve the boiling point of 212°F, and that’s a waste of precious time. Hot water is already near its boiling point, so it starts to work sooner. But just FYI, the time difference is too small to run around in search of hot water if you have a fire at hand. You can use cold water too!

21. Many emergency services use two flashing lights: red and blue. The red one adds the feeling of urgency to the situation. It’s associated with warning and danger and is one of the most noticeable colors. But this color can get lost in heavy traffic since most cars have red tail lights. That’s when blue comes in handy. Plus, using both red and blue lights helps alert even colorblind drivers. Usually, when a colorblind person can’t see red, they see blue, and vice versa.

22. Most cruise ships are white because they typically sail in hot tropical climates. The white paint reflects sunlight better than any other color and keeps the ship nice and cool. The same goes for airplanes up there above the clouds with the sun shining directly on them!

23. You, on the other hand, sweat to keep yourself from overheating. When your body warms up more than normal, your brain reacts to this potential danger by releasing sweat from the over 2 million glands scattered all over your body! It almost instantly lowers your body temperature, even if you don’t notice it.

24. Bees make honey to have something to eat all winter when there are few or no flowers (their main food source). That’s why honey is packed with nutrients and loaded with sugar – such high-energy grub helps bees survive the cold season.

25. The holes in some types of cheese are made by bacteria used in the production process. When cheese is almost ready, these bacteria release carbon dioxide. While escaping, this gas forms bubbles that later become the cheese’s “eyes.”

26. Fresh rain falling on dry ground smells so nice thanks to a unique mixture of ozone, plant oils, and bacterial spores. Oils gather in dry soil and rocks during a drought. After a rainstorm, they mix and release into the air. And, doesn’t it smell so good?

Worth Reading Articles
1. 18 Things Designed for a Different Purpose
2. Kakeibo: A Simple Japanese Money Trick to Become 35% Richer
3. 12 Easy Life-Saving Tricks That Will Save Your Life One Day

4. 10 reasons why meditation in the morning will change your life.


If you enjoyed reading “26 Short Facts That Explain Lots of Confusing Things” then please share and do comment about your thoughts on this. You might see a bell icon on the left bottom side of your screen (If not simply open iynk.in in any browser), just click on it and subscribe for more future updates and important feeds. Stay informed @Information You Need to Know.

Tanuj Sarva
Tanuj Sarva aka TJ is an entrepreneur and passionate writer. He loves reading books and watching documentaries. He explores various topics and has an ever-learning mindset. Read his latest blogs on this website which he owns Iynk.in | Information You Need to Know
RELATED ARTICLES
Facts

10 Signs You Are Doing Better Than You Think

26 Psychological Tricks to Convince People to Do What You Want

Why is the sky blue?