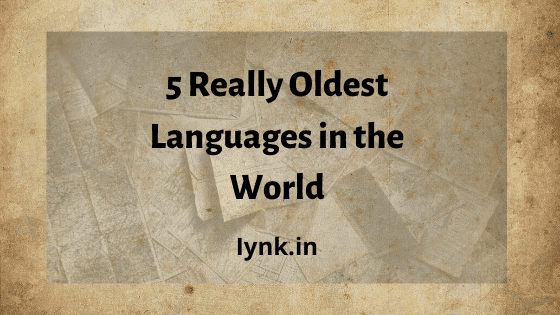 Have ever wondered where today’s languages originated And which ones are the oldest languages like everything else in the world have evolved over time and today I’m looking at the five oldest languages in the world. How’s it going, everybody? let me know in the comments.
The oldest language has been a debatable topic for as long as I can remember, given the fact that before written language there was no 100% accurate method in dating what languages were spoken First, in any case. I did my best to make this article as accurate as possible.
Now the question for you guys before I start, what are the languages do you speak, let me know in the comments down below?

Now all prominent Philosophers and scholars of the world used to think, speak and write in Greek. The language dates back to around 1500 BC and while modern Greek has evolved considerably. From ancient times it’s still one of the most historic living languages and there are over thirty-four centuries worth of records in the written word.
The majority of English words came from Greek as well as Latin modern Greek is often said to have started in the Year 1453 ad. Today it’s the official language of Greece and Cyprus.

So many people think that the ancient Sumerian language is the most ancient language in the world it’s not, however, Sumerian is the oldest language for which we have written Samples. It was used by the people of Sumer before the second millennium BCE and it’s not related to any other language existing right now.
Sumerian continued to be used in written documents well after the spoken language was taken over by Akkadian language and is one thing to know that the Sumerian language never extended much beyond southern Mesopotamia.

So the Egyptian language is known to be derived from Afro-Asiatic languages and dates back to 3400 BC. The ancient Egyptians writings are known as high Glyphs and these symbols of hieroglyphics used to represent objects that existed in ancient Egypt.
According to some scholars, the concept of writing words was first developed in Mesopotamia and came to Egypt through trading.

Now, this is one of the oldest surviving languages in the world, it belongs to the southern branch of the Dravidian languages native to the Indian subcontinent. The earliest use of the Tamil language can be traced back to 300 BC but its origins are believed to be around 2500 BC.
The Tamil language is older than Sanskrit and Tamil words exist in many other languages so many scholars say that Tamil is the mother of all languages. Today over 78 million people in the world speak Tamil.

Hebrew dates back to the 10th century BCE and is an ancient Semitic language, which is a branch of the Afro-Asiatic language group. Spoken by over 330 million people across Western Asia and North Africa. There’s a controversial study in 2016 that reported that the Israelites in Egypt took 22 ancient Egyptian hieroglyphics and turned them into the Hebrew alphabet over 3800 years ago making it the oldest language in the world. There are currently over 9 million Hebrew speakers in the world today.
If you enjoyed reading “5 Really Oldest Languages in the World” then let me know in the comments and stay tuned for more.
Worth reading articles
1. 19 things you should do at least once in your lifetime.
2. How does SpaceX make money?
3. The Pareto Principle – Do more by doing less – 80/20 Rule
4. 10 reasons why meditation in the morning will change your life.
5. 45 Life Lessons, Written by a 90-year-old man.
Post Views: 408
See also  Only 1 Gram Of This Material Is Worth Over 💰 25 Billion Dollars. But Why?

3 thoughts on “5 Really Oldest Languages in the World”