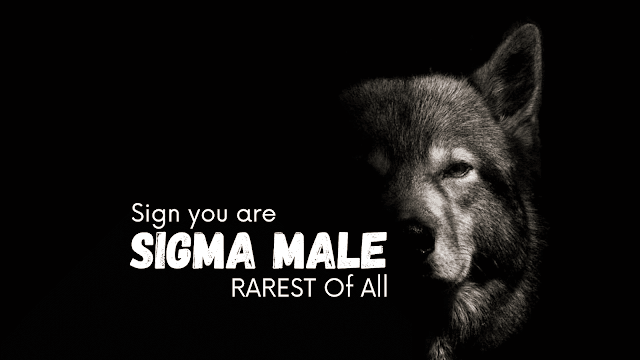 One of the most sought after most mysterious and most attractive males out there is what we would call the sigma male.

And what you have to understand is that as humans since pretty much the beginning of mankind we have been searching for something and this something is to find out who we truly are.

In the same way that the character that you choose in a video game determines what skills and abilities you start the game with.

The archetypes that you identify with as a man in real life allow you to fully harness your strengths and your weaknesses.

Now what you have to realize is that alpha, omega, beta, sigma, and so on are simply what you would call archetypes so they serve as a way to simplify a set of personality traits for a certain type of man.

Now many of us strive to be more like the alpha male when at the same time our personality is more suited to that of the sigma.

All of us indeed have the potential to play pretty much any archetype at any time depending on the situation that we’re in.

But every single one of us has an archetype that we naturally identify with more than the others.

Now for many men, the alpha and the sigma archetypes come more naturally when they’re alone with two to three girls and no other males within the group.

Now always keep in mind that we are not defined exclusively by one single archetype and that the archetype that we play will depend on dynamic changes within our social environment and depending on things like who else is around us.

The first sign that you could be a sigma male and not even realize it.

1. It’s doing your own thing

The number one sign or the one thing that sets the sigma apart from the alpha, the omega and all the other male archetypes is the lone wolf attitude.

So if you’re a guy who frequently thinks of himself as a lone wolf and you like spending time by yourself and you thoroughly enjoy doing your own thing most of the time then you could be more of a sigma than you ever thought.

Men who identify with the sigma man qualities don’t rely on others very much.

They don’t care about social media and broadcasting to the world their personal life and to be honest, some people might even refer to them as loners.

But rather than seeing this doing your own thing as a sort of weakness the sigma actually draws inner strength from not needing the social validation that others constantly seek.

In terms of attraction, many girls find this level of independence incredibly attractive.

2. The ability to control a room

But here’s where it gets a little bit mysterious now you might be thinking to yourself “I thought only the alpha males dominate a room” but the truth is that both the sigma and the alpha can control pretty much any room that they walk into but they simply do it in different ways.

Alphas are well known to dominate the environment they walk into using loud straightforward behaviour.

But the sigma achieves the same goal using a quiet mysterious kind of energy.

Now once again the sigma can play on his natural tendency to keep to himself and convey to the people around him in a quiet confident mysterious sort of vibe.

People in the room are looking around at both the alpha and the sigma and they’re wondering what it is about the sigma that gives him nearly as much control over the room as the alpha and eventually they’ll realize that it is the mystery that makes him so incredibly appealing.

Now, something to keep in mind here is that being super quiet and keeping to yourself without displaying confidence is really just being a weirdo.

This mysterious confident vibe is the thin line that the sigma walks and quietness without confidence will put you into the weird category of men.

Something that makes the sigma male incredibly unique and allows him to play in the same league as the alpha is the ability to be self-sufficient.

People all over the world particularly females find a man who doesn’t really need anything from anyone incredibly attractive because most unattractive behaviours that men engage in are actually caused by neediness.

Now depending on the situation, this could be an excessive need for validation or for attention or even for things like needing somebody to do your laundry for you.

So for those of you guys out there who still have your moms doing your own laundry, there’s a good chance that you might not be the best fit for the sigma architect.

Independence is incredibly attractive and even men find it much easier to respect other men who are self-sufficient.

Because if you get into a tricky situation in life the sigma is the one who will have your back and you won’t have to tell him what to do.

Being self-sufficient means as an adult being able to bring home the bacon both literally and figuratively speaking.

But it also represents things like self-sufficient character traits such as drawing your own inner strength and motivation and not needing excessive validation from other people.

4. The ability to think deeply

Most sigma males tend to think with a very analytical mind and some would even say that they overthink things.

Now the important thing to remember here is that by nature people who think like this tend to be very intelligent.

So in this regard, the sigma male is naturally more intelligent than other archetypes and the ability to maintain that mysterious frame that makes him so incredibly appealing to other people.

Put simply this, sigma is the guy in the movies who’s always one step ahead of the bad guys and no matter what gets thrown at him he always finds a way to win in the end.

You see all sigmas have a sort of dark side to them meaning they’re actually more of a bad boy than your typical person and this whole “I don’t care” “I’m not trying to impress anyone” attitude serves to make them even more attractive.

The sigma is the guy who doesn’t get into trouble all the time but who has no problem pushing the boundaries on what society views as acceptable behaviour.

And it’s this exact frame of mind that sets the sigma apart from other men and allows him to truly stand out and be unique.

while most other people play the role of the sheep and simply do what everyone else is doing or what everybody else tells them to do.

At the core, a sigma is basically an introverted alpha meaning he has many of the same traits as the alphas such as inner confidence and strength but at the same time, he displays these traits in a quiet mysterious kind of way rather than being loud and entirely straightforward.

Something that you have to understand is that inside every one of us is a particular archetype that we identify with more than any of the others.

And by knowing and understanding this archetype we can better play to it and basically amplify our own strengths while avoiding shining a light on our particular weaknesses.

In hands down one of the most powerful rarest and attractive archetypes out, there is by far what you would call the Sigma.

In a way that amplifies the skills and the strengths that you already have as a person that you’ve picked up since the time that you were born and throughout the experiences that you have had in your life.

This has been five signs that you might be a sigma male which is one of the rarest types of men out there.

See also  How to Think Better - Avoid These 5 Logical Fallacies
Join this amazing community of Iynk.in with over 5000+ users by subscribing to our email newsletter. Don’t forget to verify 🙂
Post Views: 536

8 lesson you should UNLEARN