Contents show
9 SIGNS YOU’RE WAY MORE INTELLIGENT THAN YOU REALIZE
➲ You realize how much you don’t know
➲ You wear the same clothes every day
➲ You can feel what others are thinking
➲ You can perfectly control yourself
➲ When you’re upset, you know what’s bothering you
➲ You talk to yourself
➲ You can’t stand any background noise
➲ Your handwriting is messy 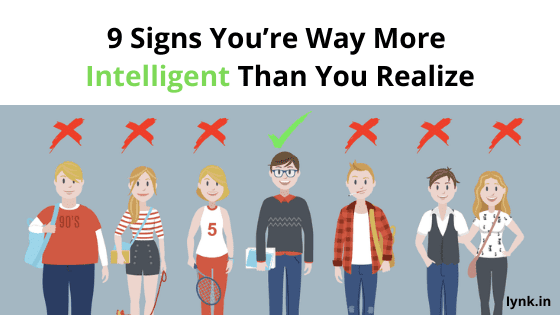 Hey, So is there any possibility to know are you intelligent or not? and my answer is yes. these 9 signs will let you know about How intelligent, are you?

According to researchers and scientists, here are some proven ways to know whether you are intelligent or not.

➲ You realize how much you don’t know

It’s as contradictory as it may sound, a true genius easily admits how much he still doesn’t know.

You can be naturally great at making words rhyme or have a musical Talent the size of evolving but fail at physics more than that.

You must definitely have some Concepts to explore even in your professional field if you can honestly say, I don’t know.
Instead of Ummm Oh, yeah, I have an idea of how it functions and then Googling the conversation topic like crazy.

It shows you are an intelligent person. This idea is backed up by science Justin Kruger and David Denning worked with a group of Cornell University undergrads and published the results and their research in the Journal of Personality and Social Psychology in 1999.

They ask students to predict their scores after being tested in humor logical reasoning and English.

Students who were Hundred percent sure they did outstandingly well ended up with worse results than those who were more critical of themselves.

➲ You wear the same clothes every day

Have you ever noticed Mark Zuckerberg tends to appear in public in the same grey t-shirt all the time?

We don’t think he doesn’t have enough money to take fashion advice or style up his wardrobe a more likely explanation of sticking to the same fashion routine is being a genius.
Psychologist Oliver Burkman has done some serious research on the lifestyle of the Brightest Minds in the world.

He concluded that smart people tend to save up their mental abilities for more important things. Unless those smart people are fashioned, Miners or Lady Gaga? Of course.
We don’t encourage you to disregard fashion to wake up your inner genius, but this study does make sense.

Some genius inventions, brilliant writings that can be created during that time you spent picking the perfect outfit for the day.

So next time you see your geeky colleague don’t blame him for that gray Turtleneck is wearing every day.

➲ You can feel what others are thinking

It’s not like you’re psychic but there are some signs of it. Do you know that when you’re talking to someone and they can’t find the right word or just postponing finishing the sentence and you do it for them? If you do you might be a genius.
Empathy is a sign of exceptional mental intelligence. If you are emotionally intelligent, you love meeting new people and learning new things.

According to psychologist and author of focus the hidden drivers of Excellence Daniel Coleman.

People who care a lot about others and can feel them well, succeed in life literally feeling the pain of others helps you understand life better. So you can excel at living it.

You can even learn from the mistakes of others. Not your own genius isn’t it

➲ You can perfectly control yourself

The ability to control instincts is what we know distinguishes humans from animals.

Genius people went even further. They managed to overcome and control any impulses they have.

If you can plan and achieve goals without being distracted by emotions, you are more intelligent than you might imagine.
You can even avoid getting in trouble by predicting the possible outcomes of this or that action.

A group of scientists from Yale Princeton, the University of Minnesota and other educational institutions, tested a group of people in Nate, they offered the participants of the experiment to choose from being paid immediately or get money later, those who prefer to waiting and getting more money later had better scores on intelligence tests.
It showed that people who are not afraid and can control their actions including spending their money are more intelligent than those who find it hard to plan anything.

➲ When you’re upset, you know what’s bothering you

We all have those days when everything seems to upset us coffee doesn’t taste that good, The Shining sun is annoying, and if people are asking you what’s wrong, you only want to yell back at them even genius people get upset at times a lot in fact, but they know exactly what’s bothering them.
It gives them an opportunity to solve the problem and move on. Yes, genius people don’t stick to the past and they don’t blame everyone and everything around for their sadness. Psychologist Daniel Goleman explains

A mind free of constantly bothering emotions and anger will more likely generate something outstanding.

➲ You talk to yourself

You got to be kidding me. I always thought that talking to yourself as a sign of Madness not genius.

It turns out it’s just the opposite, psychologist Daniel Squiggling and Gary Lupyan conducted a whole study on it the good self-talk according to them helps us sort the important thoughts from useless stuff going through our minds. It’s a way of singling out ideas.
Some of them might be a genius, listening to your own voice helps you understand yourself better.

Maybe it was speaking to himself that helped out Einstein becomes one of the brightest minds of all time. Yes, it turns out Einstein used to repeat his lines to himself.

If you feel like getting your noisy neighbors a one-way ticket to Barbados, you are not Super Evil, You are most definitely super-intelligent.

Loud music and drilling annoy anyone but we’re talking about stomping, laughing, and Loud talking kind of noise. A study conducted at

Northwestern University has stated that a genius hates any kind of background noise because it prevents I’m from concentrating on important issues.

➲ Your handwriting is messy

That’s just about everybody. Next time somebody criticizes your handwriting simply nod and say I’m sorry you don’t get it and Triumph on the inside.

Messy writing is one of the signs of a genius. The creative disorder is a concept that was established long ago and there is even research that claims that it serves as a kind of fuel for those with a creative nature.
The results of this research carried out by Kathleen Vows and her team were published in a psychological science journal. Messy handwriting is also one of the signs of a creative Oh, thank goodness.
So did you recognize any of these signs in yourself? Or maybe you are now positive your best friend is a genius. lol.

If you enjoyed reading “9 Signs You’re Way More Intelligent Than You Realize” than please let me know in the comments and stay tuned for more interesting articles like this.
Join this amazing community of Iynk.in with over 5000+ users by subscribing to our email newsletter. Don’t forget to verify 🙂

20 Psychological Tricks to Try on Your Friends