Contents show
Can a human use 100% of his brain?
Is only 10% we use of brains out of 100%?
Where did the 10% Myth begin?
Why Does the Myth Continue?
You can also read: Why is the sky blue?
What Does it Mean to Use Only 10% of Your Brain?
You can also read:
7 Secrets of AI (artificial intelligence) you didn’t know about
If so then we can also use 100% of our brain isn’t it? 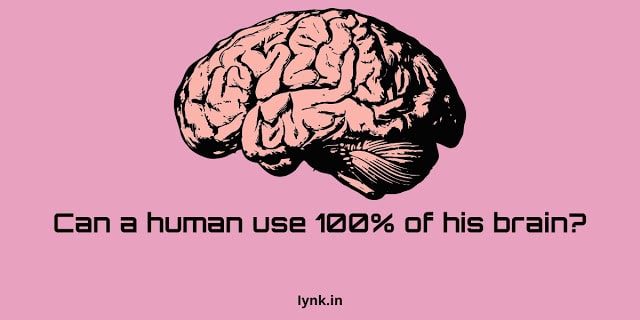 So, Is there any possibility that a human can use 100% of his brain?. Therefore In today’s article, we will fold out some facts and find out if its true or just a myth.
First of all, we’ll try to find out

Well in theory “There is no scientific evidence to suggest that we only use 10% of our brain.”

The 10% statement may have been started with a misquote of Albert Einstein or the misinterpretation of the work of Pierre Flourens in the 1800s. It may have been William James who wrote in 1908: “We are making use of only a small part of our possible mental and physical resources” (from The Energies of Men, p. 12).  Perhaps it was the work of Karl Lashley in the 1920s and 1930s that started it. Lashley removed large areas of the cerebral cortex in rats and found that these animals could still relearn specific tasks. We now know that the destruction of even small areas of the human brain can have devastating effects on behavior. That is one reason why neurosurgeons must carefully map the brain before removing brain tissue during operations for epilepsy or brain tumors: they want to make sure that essential areas of the brain are not damaged.

Why Does the Myth Continue?

Somehow, somewhere, someone started this myth and the popular media keep on repeating this false statement (see the figures). Soon, everyone believes the statement regardless of the evidence. I have not been able to track down the exact source of this myth, and I have never seen any scientific data to support it. According to the believers of this myth, if we used more of our brain, then we could perform super memory feats and have other fantastic mental abilities – maybe we could even move objects with a single thought. Again, I do not know of any data that would support any of this.

You can also read: Why is the sky blue?

What Does it Mean to Use Only 10% of Your Brain?

What data was used to come up with the number – 10%? Does this mean that you would be just fine if 90% of your brain was removed? If the average human brain weighs 1,400 grams (about 3 lb) and 90% of it was removed, that would leave 140 grams (about 0.3 lb) of brain tissue. That’s about the size of a sheep’s brain. It is well known that damage to a relatively small area of the brain, such as that caused by a stroke, may cause devastating disabilities. Certain neurological disorders, such as Parkinson’s Disease also affect only specific areas of the brain. The damage caused by these conditions is far less than damage to 90% of the brain.
So, here we are,
Is only 10% we use of brains out of 100%?
Perhaps when people use the 10% brain statement, they mean that only one out of every ten nerve cells is essential or used at any one time? How would such a measurement be made? Even if neurons are not firing action potentials, they may still be receiving signals from other neurons.
Furthermore, from an evolutionary point of view, it is unlikely that larger brains would have developed if there was not an advantage. Certainly, several pathways serve similar functions. For example, several central pathways are used for vision. This concept is called “redundancy” and is found throughout the nervous system. Multiple pathways for the same function may be a type of safety mechanism should one of the pathways fail. Still, functional brain imaging studies show that all parts of the brain function. Even during sleep, the brain is active. The brain is still being “used,” it is just in a different active state.
Finally, the saying “Use it or Lose It” seems to apply to the nervous system. During development, many new synapses are formed. In fact, some synapses are eliminated later on in development. This period of synaptic development and elimination goes on to “fine-tune” the wiring of the nervous system. Many studies have shown that if the input to a particular neural system is eliminated, then neurons in this system will not function properly. This has been shown quite dramatically in the visual system: complete loss of vision will occur if visual information is prevented from stimulating the eyes (and brain) early in development. It seems reasonable to suggest that if 90% of the brain was not used, then many neural pathways would degenerate. However, this does not seem to be the case. On the other hand, the brains of young children are quite adaptable. The function of a damaged brain area in a young brain can be taken over by remaining brain tissue. There are incredible examples of such recovery in young children who have had large portions of their brains removed to control seizures. Such miraculous recovery after extensive brain surgery is very unusual in adults.
Therefore “We only use 10% of our brain” in a nutshell, MYTH BUSTED.

You can also read:

7 Secrets of AI (artificial intelligence) you didn’t know about

Technically speaking it is not possible to use 100% of our brain for a single activity. But there is a fact that the way we increase our strength by muscular training similarly there are ways we can unlock or just use a higher percentage of our brains. The capabilities of your brain can be expanded by maintaining your health and challenging yourself to new things. Certain steps to try to unlock a larger part of your brains are :
If you enjoyed reading “Can a human use 100% of his brain?” then please let me know in the comments and stay tuned for more.
See also  Independence Day facts 15 August

Or you can listen to this post where ever or whenever you want!

Top 10 incredible facts about Space you didn’t know about.