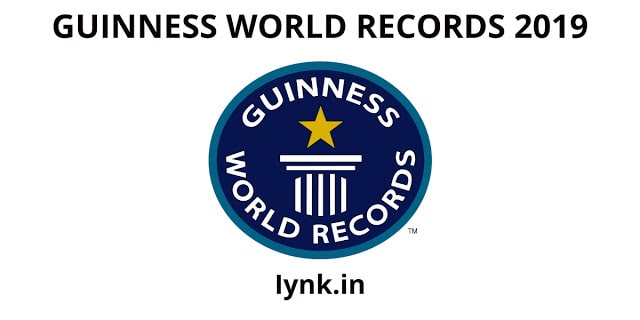 1. This German 16-year-old has the largest feet on a teenager at a whopping size 20 (Guinness World Record 2019)

The record for the largest feet on a teenager (male) has been broken by German teen Lars Motza, who was 16 years and 59 days old at the time of measurement on 19 November 2018.

A 17-tonne truck has been lifted into the air, attached to a crane using only glue.
DELO, a small manufacturing company of industrial adhesives in Germany, has set a new record for the heaviest weight lifted with glue (non-commercially available) at a hefty 17.20 tonnes (37,919 lb) on 12 July 2019.
Glue was applied to a small aluminum cylinder (the size of a soft drink can) on a crane which then lifted the truck was successfully one meter into the air. The entire weight was suspended for one hour on a bonded aluminum cylinder with a radius of just 3.5 cm.

3. Watch the ‘Bass Queen’ sing the lowest note by a woman

See also  11 optical illusions that will reveal your personality type
A Welsh musician has recently broken the record for the lowest vocal note (female).
Helen Leahey, the aptly named ‘Bass Queen’, sang from a D5 to a D2 note at an incredibly deep 72.5 hertz(es) in her attempt at the Music School Wagner in Koblenz, Germany.
Helen, originally from St Asaph in Wales but now living in Germany, has recently returned to singing after the birth of her first child.
The record to beat was a musical note E2 at 82.4 hertz(es).

More than 1,300 women from 18 to 92 years old have assembled to help break the record for the largest gathering of people dressed as brides.

Sedaka Novias, a bridal fashion store in Petrer, Spain, organized the attempt on 29 June which saw 1,347 women from across Spain take part. The queues to enter the venue were so long that sadly some of the brides were left out!
There were a variety of participants from single to married and even divorced women, who were all dressed head to toe in white.
Teresa Berna, aged 92 from Petrer, Spain was ecstatic to take part in the record as she was able to wear a white bridal dress for the first time because when she married in 1951. Teresa declared she was “very excited” to wear white because at her wedding 68 years ago she “had no money” and had to marry wearing black.
The owners, Milan Zhivkov and Maria Salud Serrano, organized the event to celebrate the opening of their new store and were overjoyed with the record. As soon as they saw that they surpassed the previous record by a Chinese shopping center, “they began to cry with emotion”.

You can also read Top 10 incredible facts about Space you didn’t know about.

To mark its 25th anniversary, Young Living Essential Oils (USA) has achieved the most contributions to a lip print mural in one week with 10,862 people leaving their mark on the company’s history.

The the record-breaking feat took place at the brand’s annual International Grand Convention in Salt Lake City, Utah from 16-20 July which is attended annually by more than 35,000 Young Living members from around the world.

With 2019 being a milestone year, the company wanted to do something special to highlight Young Living’s ever-growing success and commemorate its dedicated community of members and decided that an official Guinness World Records title attempt would be the perfect way to do so.
The attempt began at 10:15 a.m. on Tuesday 16 July.

Throughout the conference, attendees lined up outside the attempt arena where they checked in with the stewards assisting with the record count and proceeded into the designated attempt area to make their contribution.

Using various lipstick shades from Young Living’s makeup brand, Savvy Minerals, such as Mic Drop, Sweet Life, and Miss Congeniality, men, women, and children in attendance, enthusiastically applied their lipstick kissed a sticker and placed it carefully onto the mural.

See also  8 Things You Need to Stop Expecting from Others

Two giant panda cubs born at Hetaoping Wilderness Training Base in Sichuan Province, China, have unwittingly set a milestone for their threatened species.

Indeed, the size difference between a full-grown giant panda and its tiny infant is a record in its own right. At approximately 1-900th their mother’s weight, these bears are the smallest placental mammal babies relative to adults.

Harlech, a sleepy town set in the hills of North Wales, boasts a beautiful seaside, a 13th-century castle and stunning panoramic views.

But the town can now add something else to the list – Harlech is officially the home of the world’s steepest street.

Ffordd Pen Llech, which snakes through the town of Harlech, has a gradient of 1:2.67 (37.45% stretch over fall). That means those traveling on the street go 1 m up (or down) for every 2.67 m traveled horizontally.

This the record beats Baldwin Street in Dunedin, New Zealand which has a ratio of 1:2.86. Baldwin street has held the record for over a decade.

For the purposes of this record, a ‘street’ or ‘road’ is defined as a public thoroughfare that is commonly used by the public who have a right of access to driving vehicles along it to get from one destination to another.

Sculpture Projects GmbH has created a castle measuring 17.65 m (57 ft 11 in) high in Binz, Germany, which was adjudicated on 5 June 2019.  The record was broken for the Sandskulpturen Festival’s 10th anniversary.

An international team of 12 sculptors and eight technicians from Russia, Poland, Hungary, Germany, Holland, and Latvia created a huge structure in three-and-a-half weeks.

There’s no internal structure supporting the castle up, and no additives in the water to bind the 11,000 tonnes of sand together.

The circular base diameter of the sandcastle measures approximately 26 m (85 ft 3 in).

9. Freediver Ant Williams holds his breath as he plunges 70 m under the ice in daring record

The dive, which lasted 2 minutes 29 seconds, saw him push through the pitch-black abyss on a single breath.

The the risky pursuit of freediving under the ice is fraught with physical and mental challenges – overcoming the body’s natural reaction to panic and controlling bodily tension throughout the dive, were just some of the issues Anthony had to conquer.

AI basketball-playing robot, CUE3, had broken the Guinness World Records title for the most consecutive basketball free throws by a humanoid robot (assisted).

CUE3 is developed by Toyota volunteers and is an official member of the professional basketball team Alvark Tokyo. The robot has small motors in each axis and detects the goal position using the camera and radar attached to its chest. Using the readings taken off the camera, CUE3 moves the motors based on AI learning.

During the challenge, Toyota volunteers placed the ball on CUE3’s hands and executed the shooting action from the control desk. The tension was high as any error in this manual operation could lead to the robot missing the hoop.

Seven hours into the challenge, CUE3 successfully reached the 2,020-mark to clinch the record. Afterward, the team’s project leader, Tomohiro Nomi, said that the world is changing “to an environment where new challenges are encouraged. I am happy that CUE3’s an attempt will inspire others”.

I hope you enjoyed reading “Guinness World Records 2019 | Top 10” if so then please let me know in the comments and stay tuned for more.