HomeInformativeHow social media changed our lives? Are we connecting or disconnecting ?
FeaturedInformativeInternetSlider

How social media changed our lives? Are we connecting or disconnecting ?

How social media changed our lives? Are we connecting or disconnecting?

You can find this article everywhere on google but here I will try to explain this topic as uniquely as I can. 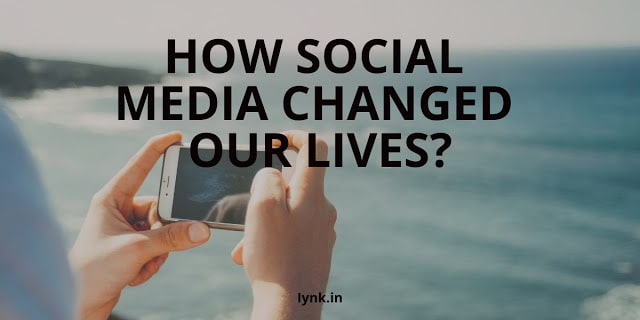 Social media is everywhere, we all are connecting or are we disconnecting?  Believe it or not but social media has become one of the major parts of our lives. We use it from morning till night or from dusk till dawn. We are getting really addicted to social media, we just pop it open whenever we are sitting idle or doing nothing. But some out there are doing it purposely they might be the influencer or getting influenced.

Whenever I go outside let’s say a park I literally find out almost every human on that land is using a cellphone or to be more specifically social media. So the point is are we connecting? or are we disconnecting?. Nowadays we are very engaged in our cellphones. Just look around there are people wanting your attention, need you to talk to them, but you are busy on social media talking to some other person far from you and the other person is as close to you as possible but still, you are more engaged talking to the other person. Sometimes, its all upon you whom you give priority the most or who is more important to you.

Social media is really shaping our lives. Our today’s type of mood is somewhat depended upon social media. When we get tons of like on the newly updated Facebook post or an Instagram photo, we are happy if that doesn’t happen then we are not as happy as we were before. Of course this a human nature but why to get upset if we don’t get enough likes just to show off or to prove yourself that you are inferior that doesn’t make any sense. You are always going to remain as authentic as you are right now.

After the initial success of mobile phones, the usage of social media has increased drastically as shown in the graph below. 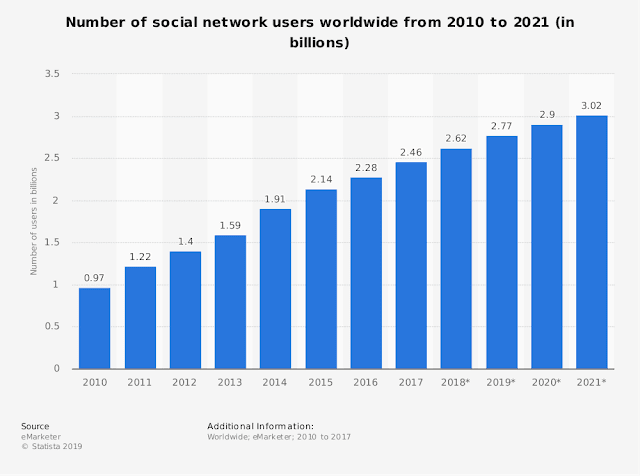 I am not a huge fan of social media myself, partly I prefer to stay in the real world itself. And partly I stay on social media so here I am talking to you.

You can also read 5G | Information about 5G

But, social media has its own merits too. Well, let’s discuss it.

How social media changed the things we do? 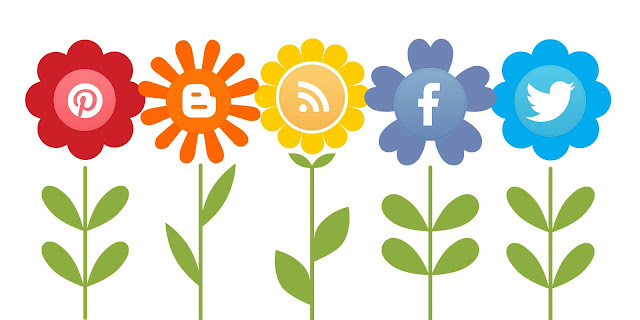 Businesses across the globe can amplify their brand message to a wider audience than they could ever dream of doing before achieving the success that they could wish for. In the old days, mass media ruled. A company had to pony up thousands or even millions of dollars to be heard in most cases. Very large companies with huge funds ruled the market. But now even an individual with a very brilliant idea coupled with excellent marketing abilities can achieve great financial success on social media.

Small companies are carving out a market for themselves amongst the 2.4 billion people estimated to be connected to social media presence is a cheap and effective means to enhance brand image and popularity.

Social media has also changed how businesses recruit individuals into their companies. Looking back 10 years ago, recruiters were limited in the ways they could reach out and engage with potential candidates and clients, but thanks to the rise of the internet and mobile devices paired with the growth of social media, it would seem modern-day recruiters are now spoilt for choice in the ways they can make contact with potential candidates and clients.

Social media has also made it easier for us to express ourselves. There are numerous ways we can express ourselves, not only to our friends but to the outside world. Whether that is through Facebook, Instagram photos, YouTube videos, and many more. Normal people now have the capacity to make their opinion known on a massive scale. Before social media, you could have an opinion but you can only tell a few people who you know.

If we talk about reconnecting, Social media offers the opportunity for people to re-connect with their old friends and family members, yeah it’s as delightful as you think.

But just like most things, there are drawbacks and downsides to the excessive use and reliance on social media…

First of all, the idea of “friends” was once very simple. If you knew someone, hung out with them regularly, and liked their company then they were a friend. While the people who still fit that description are still your friends, so are the people you have connected with on social networking sites apparently. Whether you talk to them, care about what they’re up to, or have any interest in them whatsoever, they’re still listed as your friends.

Another thing that most people forget, is that, If you are not careful, what you post on the Internet can come back to haunt you. Revealing personal information on social sites can make users vulnerable to crimes like identity theft, stalking, etc. As stated earlier, many companies perform a background check on the Internet before hiring an employee. If a prospective employee has posted something embarassing on social media, it can drastically affect their chances of getting the job.

Cyberbullying is also becoming frequent. If you are not careful, unscrupulous people can target you for cyberbullying and harassment on social sites. School children, young girls, and women can fall prey online attacks which can create tension and distress.

Extensive use of social media can destroy our practical life, and normal usage of it can improve our lives. Likewise, using it in a more efficient way as I do, making the Internet a platform to share my opinions with you, what I think, what I feel, and whatnot.

If I would like to suggest you something is

I hope 🙏 you enjoyed reading ” How social media changed our lives? Are we connecting or disconnecting ? ” please let me know in the comments and stay tuned for more..

19 things you should do at least once in your lifetime.

Why You Should Read Books – 14 Benefits Of Reading More