Philosophy – How Not to Get Offended

Philosophy – How Not to Get Offended 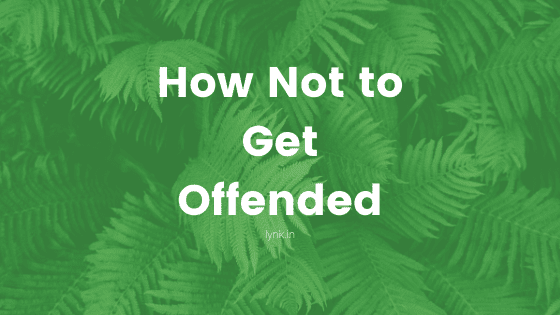 It’s quite easy to offend someone these days. Even me stating this conversation can rub someone up the wrong way.
In the age of social media, we get bombarded with crude language, opinions we don’t like and stuff that’s downright mean.
That’s probably why we see an increase in language policing and censorship.

To some extent, depending on the context, this can be a good thing, for example, to protect minors.
But when it’s going too far, we can ask ourselves: aren’t we getting too thin-skinned? From a Stoic point of view, we’re not offended by what we deem offensive, but by our choice to be offended.
Words of other people cannot hurt us unless we let them. In this article, I’ll explain to you, Stoic wisdom that can help us thicken our skin.
Seneca the Younger was a statesman, dramatist, and satirist. But I think that most of us know him as one of the great Stoic philosophers.
Seneca was concerned with the nature of insults and being offended.

He wrote down his thoughts on this matter in a work named De Constantia Sapientis, which is Latin for “On the Firmness of the Wise Man”.
He criticized his friend Serenus for wishing that people, in general, shouldn’t offend each other.

This brings us to the first piece of wisdom:

The world is full of people that are selfish, insolent, arrogant, ignorant, mean, cruel, and so forth. This may sound pessimistic, but it isn’t far from the truth.
We cannot expect that people are nice to us all the time because they aren’t.

Humans possess the full range of emotions, desires, and mindstates: from angry, to happy, from compassionate to sadistic.
See also  The Pareto Principle - Do more by doing less - 80/20 Rule
Also, there are as many opinions as there are people, including opinions we don’t agree with.

Resisting this is a recipe for disappointment and will lead us to ‘get offended’ all the time by what’s simply a product of nature.
Demanding that the world doesn’t offend us is futile because it’s impossible to alter more than 7 billion people to our own liking.
As Seneca stated:

“You are expressing a wish that the whole human race were inoffensive, which may hardly be; moreover, those who would gain by such wrongs not being done are those who would do them, not he who could not suffer from them even if they were done.”.

Now, even though we cannot demand that everyone will always be nice to us, this doesn’t mean that we should put up with people treating us badly.
We can set boundaries, and choose not to spend time – or at least limit our interactions – with people that don’t respect us.

But if we accept that people will be people including their darker sides, we’ll not only have a much easier time here on earth; we also give our fellow human beings the right to exist and speak their minds.

So, in my book, which I’ll talk about a bit at the end of this video, I’ve made a proposition inspired by the work of Seneca, on how to handle insults based on truthfulness.
With this method, it’s logically impossible to be offended. Before I continue, let’s take a look at what Seneca had to say about handling insults, jokes and other stuff that people may throw at us. On quote:

“Someone has made a joke about the baldness of my head, the weakness of my eyes, the thinness of my legs, the shortness of my stature; what insult is there in telling me that which everyone sees?”.

Now, the approach is very simple. If someone offends you, ask yourself if the thing that you feel offended by is truth or nonsense.
See also  How To Stop Overthinking Everything You Do - Quick Tips
If it’s truth, why be offended by the truth? Or as Seneca states: “what insult is there in telling me that which everyone sees?”
If it’s nonsense, why be offended by nonsense? If someone throws nonsense at us, isn’t the person that does so the one who should feel ashamed instead of us?

Seneca noticed that for some reason, people think that being insulted is one of the worst things that can happen. On quote:

“..many think that there is nothing more bitter than insult; thus you will find slaves who prefer to be flogged to being slapped, and who think stripes and death more endurable than insulting words.”.

For your information: being slapped was a grave insult in the time that Seneca lived. He was a contemporary of Jesus Christ.
So, it’s no surprise that the Bible speaks about ‘showing the other cheek’ after being slapped.

In this context, ‘slapped’ doesn’t mean physical assault but, rather, an insult.
When we are insulted, our ego is attacked. This is a consequence of the story we tell ourselves about ourselves and how the world should be.
That’s why we see that in different cultures and subcultures people are offended by different things.

When something conflicts our story (whatever that may be) this could lead to feeling offended.

The questions we could ask ourselves are these: why are we getting offended?

What’s the root of this?

Is it because I’ve been culturally conditioned to be offended by this?
See also  How Tiny Habits Work? Achieve Anything
In my opinion, it shows much more character if we try and seek the root of our emotional reactions within ourselves, instead of immediately finger-point at the outside world.
Our own faculty is our own responsibility and what other people think is none of our business. But hey, that’s just my opinion.
Join this amazing community of Iynk.in with over 5000+ users by subscribing to our email newsletter. Don’t forget to verify 🙂
Worth Reading Articles
1. 15 Signs You Have A Strong Intimidating Personality
2.  10 Signs You’re TOO Nice – And What To Do About It
3. 10 Things You Should Always Keep To Yourself
4. The Pareto Principle – Do more by doing less – 80/20 Rule

5. How You Can Trick Brain To Like Doing Hard Things (Dopamine Detox)

If you enjoyed reading “Philosophy – How Not to Get Offended” then please share and do comment about your thoughts on this. You might see a bell icon on the left bottom side of your screen (If not simply open iynk.in in any browser), just click on it and subscribe for more future updates and important feeds. Stay informed @Information You Need to Know.
Post Views: 405

How to Ignore People (Life-Changing)

How Tiny Habits Work? Achieve Anything

1 thought on “Philosophy – How Not to Get Offended”