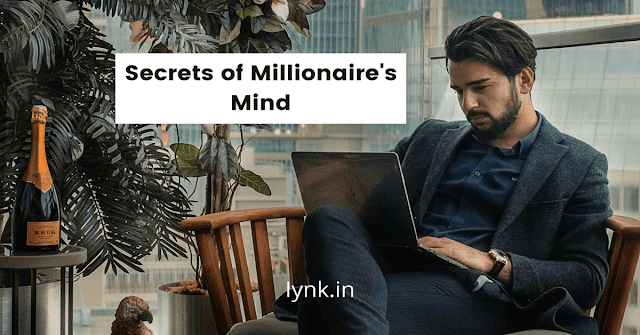 Do you want to know the secrets of a millionaire mind? Maybe you are rich maybe you are poor maybe you have experienced being both at some point in your life.
If you haven’t figured it out yet being rich isn’t all about money. It’s about well-being abundance having time success and the right mindset.
There are definitely social issues that contribute to poverty however rich versus poor mindsets can also drive wealth and success. There are many poor people with a rich mindset financially poor due to circumstances and there are many trust fund babies with a poor mindset.
A simple shift in your mindset can point you in the right direction to becoming as wealthy as you want to be.
Millionaires Mind
Contents show
Resourcefulness
Gaining Momentum
Risk V/S Reward
Reputation
Luck means opportunity
Celebrate Others
Mentor mindset
You can’t do it all
No one to quit
War of attrition
There’s no such thing as done.

Rich mindset understands that the first goal is to gain a surplus of resources than to use that surplus to accelerate things.
Accelerate education accelerates a business to accelerate the next generation’s poor mindset immediately sees a surplus as an opportunity for consumption and inflates lifestyle.
Challenge yourself, Create a 30-day list. If you have to wait for your paycheck to buy something it better be something you absolutely need to think about where you can accelerate things begin to build your personal advantage.

Rich mindset is willing to invest resources with seemingly no return right away. Not everything has a clear path to profitability you have to take a chance and try it’s about Risk V/S Reward
A poor mindset to media thought is what’s in for me why pay money to fly to a conference pay for a hotel and spend all the time when they’re not even paying you.
Challenge yourself you need to be willing to take calculated risks because no reward worth discussing came without risk being uncomfortable is important it means you’re growing.

Rich mindset seeks to build relationships based on trust liking shared values and mutual respect people with the rich mindset help others and cultivate relationships with no expectation of anything in return Poor mindset thinks I scratch your back you scratch mine.
Challenge yourself you’re the average of the five people you spend the most time with start making new friends who have a rich mindset go to a local meetup group and meet people.
you can learn from being the dumbest person in the room to make connections with smarter people and you’ll all win smarter people make smart people even more successful.

Rich mindset understands that its reputation is everything the trust and respect are earned slowly through hard-fought bloody effort and that both can be lost in an instant poor mindset believes that can get away with compromising its reputation to make a quick buck.
Challenge yourself take the high road always consider the consequences of your actions and decisions.

Rich mindset knows that the world isn’t fair and deals with reality swiftly humbly and practically it knows the world owes it nothing that the universe is indifferent to his existence that the default for life is suffering and death.
All successes are improbable and should be appreciated as such a poor mindset is consumed by the unfairness of the world and wastes time complaining about it it feels the world owes it something and waits for it to be handed out.
Challenge yourself entitlement go get something you want this week then if you get it to appreciate that luck met opportunity. if you don’t get it appreciate your effort and take some time to try and understand why be humble.

Rich mindset celebrates the success of others it embraces the competition and often befriends. you have two choices tear down another person’s success or be inspired by.
The example poor mindset feels jealousy and bitterness about the success of others it looks at everything as a zero-sum game.
Challenge yourself there will always be people who have accomplished more and more likely done it better than you find a competitor and make them your mentor lead with humbleness and gratitude and you will be greatly rewarded.
Change the way you look at things and the things you look at change Wayne Dyer.

Rich mindset understands that it can never know everything and that something can be learned from everyone. Poor mindset deludes itself into believing it knows everything and that opposing perspective are wrong before you even hearing them.
Challenge yourself to seek to place yourself in a situation where you are inexperienced and uncomfortable if you are against gun control. go read some well-thought-out arguments for gun control. if you are for gun control go read some well-thought-out arguments against gun control allow yourself to build a broad well-informed perspective and allow yourself to change your mind.
The most idolize people in history almost uniformly are unafraid of changing their opinions based on new information.

You can’t do it all

Rich mindset understands that it cannot do everything and that even if it could it would create greater value by focusing on its core strings it knows the right team is greater than the sum of all its parts.
Poor mindset dilutes itself into thinking it can do everything if it just works hard enough for embracing competition rich mindset embraces competition and knows that iron sharpens iron. A poor mindset is discouraged by competition. it complains that someone already got there first or they’re obviously going to catch up to me I might as well quit.
Challenge yourself to listen to money matters was late to the professional finance game before I even started multiple people had sold their brands for millions of dollars. people I’ve met yet somehow there was still space lady gaga existed before Taylor Swift and one doesn’t hamper the success or potential growth of the other. There’s a piece of the pie for everyone the first step is showing up.

No one to quit

Rich mindset quite strategically it plans to quit in advance when it realizes the potential gains of pursuit are either unreachable with current resources or aren’t worth the pain of the work involved.
Poor mindset quits in reaction to pain and short-term discomfort.
Challenge yourself quitting a job over an argument with the boss versus using that argument to fuel their job hunt and getting an alternative before they leave their existing job. Bad things happen every week let those experiences propel you forward don’t be so reactionary.

Rich mindset sticks it out when the going gets tough provided that the pursuit is worthwhile it understands the idea of the dip. That anything worth doing will be hard it understands that the rewards are reaped by those who push through the difficulties of a pursuit precisely because the will to push through is scarce.
Poor mindset sticks things out due to stubbornness it places too much importance on sunk costs.
Challenge yourself I attribute a lot of success in my professional life and business to the war of attrition people quit you need to outlast them. however, understanding that spent time and money is gone so their expenditure shouldn’t heavily weigh on your decision.

There’s no such thing as done.

Rich mindset understands that there is no I made it no done life is defined by challenges and learning poor mindset believes that one day they’ll be able to retire to kick back and do nothing that all work is simply paying dues on the way to a life of leisure ironically.
This is the kind of mindset the stifles the ambition and drive is required to ever get to the point of having that kind of life as an option.
Challenge yourself if you don’t have to work for the rest of your life what would you do every day.
This hobby be it gardening cooking teaching etc. should be something that you focus on and cultivate. it is no accident that we build a business out of our hobby all nonprofit organizations music schools and small businesses started as a challenge slash learning experience and eventually grew into something even more meaningful than it was originally.
Join this amazing community of Iynk.in with over 5000+ users by subscribing to our email newsletter. Don’t forget to verify 🙂
Post Views: 380

11 Quick Exercises to Boost Your Memory by 90%