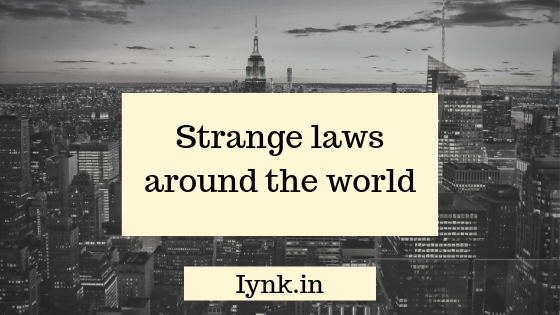 1. No building in DC may be taller than the 13 floors. This is so that no matter where in the city you are, you can see the monument to our first president, Washington.

2. In Somalia, Africa, it’s been decreed illegal to carry old chewing gum stuck on the tip of your nose.

3. Women were banned by royal decree from using hotel swimming pools in Jidda, Saudi Arabia, in 1979.

4. In Lehigh, Nebraska it’s against the law to sell donut holes.

5. In Milan, Italy, there is a law in the books that requires a smile on the face of all citizens at all times. The exemption includes time spent visiting patients in hospitals or attending funerals. Otherwise. the fine is $100 if they are seen in public without a smile on their face.

6. The movie ‘Cleopatra’ starring Elizabeth Taylor, was banned from Egypt in 1963 because she was a Jewish convert.

You can also read: Stoicism: Everything you need to know.

7. During the time that the atomic bomb was being hatched by the United States at Alamogordo, New Mexico, applicants for routine jobs like janitors, were disqualified if they could read. Illiteracy was a job requirement. The reason: the authorities did not want their trash or other papers read.

8. In Italy, it is illegal to make coffins out of anything except nutshells or wood.

9. In the state of Queensland Australia, it is still constitutional law that all pubs (hotels/bar) must have a railing outside for patrons to tie up their horse.

10. In Hartford Connecticut, it is illegal for a husband to kiss his wife on Sundays.

11. Women in Florida may be fined for falling asleep under a hairdryer, as can the salon owner.

12. At the first professional baseball game, the umpire was fined 6 cents for swearing.

13. Snoring is prohibited in Massachusetts unless all bedroom windows are closed and securely locked, It is also illegal to go to bed without first having a full bath.

14. Every citizen of Kentucky is required by law to take a bath at least once a year.

15. In Sweden, when leaving someone’s home, wait until you get to the doorway to step outside before putting on your coat. To do so earlier suggests you are eager to leave. When entering the home, it is considered very bad to shake hands across the threshold.

16. During World War II, bakers in the United States were ordered to stop selling sliced bread for the duration of the war on January 18, 1943. Only whole loaves were made available to the public. it was never explained how this action helped the war effort.

17. In the Middle Ages, the high court in France ordered the execution of a cow for injuring a human.

18. In 1845 Boston had an ordinance banning bathing unless you had a doctor’s prescription.

19. In Athens, Greece, a driver’s license can be taken away by law if the driver is deemed either “unbathed” or “poorly dressed”.

20. (All-time favorite) In New York State, it is still illegal to shoot a rabbit from a moving trolley car.

21. It’s illegal in Alabama to wear a fake mustache that causes laughter in church.

22. During the time of Peter the Great, any Russian man who wore a beard was required to pay a special tax.

24. In Pennsylvania, Ministers are forbidden from performing marriages when either the bride or groom is drunk.

25. It was once against the law to slam your car door in a city in Switzerland.


If you enjoyed reading “Strange laws around the world.” then please let me know in the comments and you liked any one of these laws then I would like to know which one. Stay tuned for more content like this.