The 11 Types Of People On The Internet

By Tanuj Sarva
May 4, 2020
0
1473
Share
Facebook
Twitter
Pinterest
WhatsApp
Linkedin
ReddIt
Email
Print
Tumblr
Telegram
Mix
VK
Digg
LINE
Viber
Naver
Contents hide
The 11 Types Of People On The Internet
1. The Centers
2. The Critics
3. The Open Sharers
4. The Simply Interactors
5. The Solely Shoppers
6. The Passive Users
7. The Proactive Protectors
8. The Gamers
9. The “New To The Internet” Users
10. The Downloaders
11. The Trolls

The 11 Types Of People On The Internet 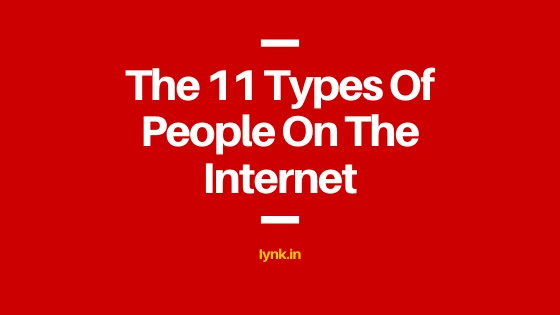 The internet is both wonderful and strange. While the perks are plentiful, I’m sure you’ll agree that internet users you can encounter online are quite diverse.

They are the biggest users! They breathe and live on the web. They take center stage on the web and are active in every social community possible.

These people love creating their own web content and are amongst the best techies. They usually read up on all of the latest developments and get the newest devices.

The internet allows anyone to be a critic while they hide behind their screens anonymously. More than 50% of people who view user-generated content, comment on blogs, and social media.

They also post ratings and reviews for products and services. Since the rate of internet users who follow user-generated content declines with age, for those over the age of 40, the percentage who are critics drops to around 10-20 percent.

You know these people, and you know them well. Whether you want to or not. At an average age of 32, these users are always on social media platforms like Facebook and Twitter.

They share everything… where they are, what they are doing, who they are doing, pictures of their new house or car and sometimes even when their last bowel movement was.

They use the internet to tell everyone what they are up to. …If only they knew how much others don’t give a crap. But, it’s the world we live in.

These people think that Facebook is the internet. They spend all day posting cute videos and inspirational quotes.

On average, they are slightly older than open sharers, more likely to be female, and only about 50% hold a fulltime job.

But that number sounds about right when all your time is spent on Facebook! To their credit, when it comes to social media, simply interactors are much savvier than the average user.

But, they fall behind everywhere else and they usually aren’t very computer savvy. Look out for that virus!

These folks are master bargain hunters. They scour the net to compare prices and find the best deals.

News, entertainment, social interaction? Nope, just deals. On that note, these people are the biggest targets of internet marketers, and they tend to know very little about how data is used to target them.

Surveys suggest that these people don’t fully realize the value of the internet.

They are more likely to be unmarried males, and while they don’t spend much time on social media, they do seem to be using many mobile apps.

Passive Users are completely okay with giving up their data while they’re unaware of targeted marketing and how to manage privacy.

It’s most likely that these guys spend most of their time online watching the naughty stuff. You know… stuff that starts with a p and rhymes with a horn.

This crowd is probably the geekiest and the oldest. But they are among the best-educated and most employable.

They have a lot in common with ‘Open Sharers’, except for the fact that they are the least willing to share their lives in public.

Small fact: Three-quarters of them routinely clear their browser cookies!

Gamers are passionate and usually a pleasant bunch. Well, until the console wars start. You know Xbox vs Playstation vs PC.

You can find them on Twitch or Youtube alike. They do tend to get a bit grumpy when their internet connection isn’t running at 100%.

Gamers tend to use the internet mainly for games, and they are much more likely to be PC users. Because mac sucks.

Everyone and their grandmother are online these days. Literally! Grandmas are popping up all over the net! Are they using the latest devices, computers, and high-speed connections? Probably not, but they are there, watching your activities.

They send emails wondering why you have time for all that social media stuff but no time to write them.

Downloaders have huge hard drives to store all their cracked software. They know their way around torrent sites and have a large collection of programs, movies, music, games, and stuff.

Yes. This list wouldn’t be complete without mentioning these guys… They’re usually hanging out in comment sections just waiting to offend someone.

But, they can sometimes bring a good laugh as well. When it comes to trolls… well, they’re everywhere, and you can’t really escape them. So, try not to take it too seriously. So then, which type of internet user are you?

Join this amazing community of Iynk.in with over 5000+ users by subscribing to our email newsletter. Don’t forget to verify 🙂
Worth Reading Articles
1. 18 Things Designed for a Different Purpose
2. 5 Things That Are Not Significant In Life
3. These Signs Shows that You Are Lonely
4. 12 Signs You’re Being Gaslighted Without Knowing It

If you enjoyed reading “The 11 Types Of People On The Internet” then please share and do comment about your thoughts on this. You might see a bell icon on the left bottom side of your screen (If not simply open iynk.in in any browser), just click on it and subscribe for more future updates and important feeds. Stay informed @Information You Need to Know.

The 3 Types of Minds – Which Is Yours?