The hidden story of every person

The hidden story of every person 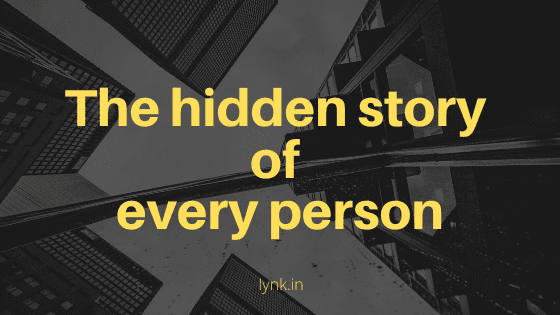 This is a story of the hidden story of every person let’s begin.

It seemed like a normal Tuesday at the head office of the athletic apparel company DGS.

Unbeknown to most of the employees, however, the company had just been bought out by one of its competitors and was now being forced to accommodate a new internal structure requiring several major cutbacks along with many others.

Jess MacDonald employee of four years would get let go this day ever since Jess was a young teenager she’d wanted to work for DGS.

It was her favorite childhood company she calculated her entire high school college and early career decisions according to this goal and now after four years at the company she’d finally started to establish a little seniority and was beginning to move upwards not enough to be one of the employees who was kept but enough for it to sting extra bad.

When she was fired on her last day, she just left the office devastated by the idea of needing to start over with essentially no hope left for her working at her dream company.

She walks several city blocks to the bus she took home which felt like the longest and most shameful walk of her life a few blocks from the bus stop Jess found herself caught behind a small group of people walking at an infuriatingly slow speed.

Jess who thought she was already walking slow enough suddenly had to reduce her speed a noticeable amount “Are you kidding me? how does an entire group of people walk this slow?” she murmured to herself.

Within a few steps just became almost sure that the group was willfully ignoring her presence behind them with no regard for anyone other than themselves.

They were as far as Jess was concerned entirely in her way planted there to make her already horrible day even worse.

Finally, Jess impatiently squeezed her way through the group bumping shoulders with two of the individuals in the row as she did she said excuse me which sounded much more like “get out of my way” than excuse me.

Then she walked on past them little to just know one of the two people she bumped shoulders with was a young man named David.
Who six months prior had been diagnosed with early-onset amyotrophic lateral sclerosis also known as ALS. A terminal disease that destroys the body’s muscles by affecting cells throughout the brain and spinal cord.

David’s family and friends were out for lunch and a walk with him. He was still early enough in the progression of the disease to appear healthy but of course, David was walking slowly because of this his ability to walk was the first to start to go.

David was now forced to either take a wheelchair or slowly and methodically. When Jess just plowed through him in the small row of his friends and family David immediately became sad and ashamed reminded of the fact that he was dying and becoming a nuisance to others around him.

Then he thought about how inconsiderate and selfish the woman was who bumped into him and how the world appeared to be playing a cruel joke on him.

Which quickly turned his sadness into anger then when David’s mom Cathy asked David if he was okay and suggested that they should go home.

David snapped at her he felt like his mom babied and embarrassed him with no ability to understand what he was going through “I only have a few years left mom please stop ruining them” David said to her.

And an impulse of anger and weakness, of course, this crushed David’s mom but because of David’s own suffering and his mom’s attempt to be strong and not make the situation about her. David was not properly aware of the magnitude of his mom’s suffering and how horribly this affected her.

Later that day first chance she got, David’s mom stopped by the liquor store she had been there a lot recently while in line at the register one of the four people in front of her was an older man with a cart filled with what looked to be at least thirty-five bottles of various wines and liquors requiring a huge obnoxious amount of time for his transaction.

David’s mom looked at the old man with complete and utter disdain thinking to herself who buys this much alcohol at once a veteran alcoholic stocking up for the month.

She felt like the man was placed specifically in her way to make her low than the bright lights of the liquor store sober and miserable.

Then when the man was asked if he got the proper discount on one of the “two-for-one bottles” causing the cashier to need to go back through the transaction.

David’s mom was sure he had no regard for her or anyone else in line and said “oh my god are you serious?” soft enough for her to think it might go unheard but loud enough for the man to hear it.

The man looked up and over to her disgusted by her impatience the man was, in fact, stocking up but for the wake of one of his longtime best friends would pass just a couple days prior.

The man thought to himself how horribly inconsiderate and nasty David’s mom must be to be so impatient over a couple of extra minutes then he thought of the woman who cut him off on the way there and then flipped them off when he honked at her.

Then he thought about how he was the only one doing any of the work to set up the funeral and prepare for the wake of his friend he wondered why everything was out to get him.

When the man finally left a line and began driving home on the way he passed through a toll booth one that for some reason still had a human in it.

The toll was one dollar and fifty cents the old man pulled up to the window and in a state of exhausted anger and inconsiderateness nearly threw the money at the collector without looking at him.
The collector had nothing particular going wrong in his life at this moment he was however just generally miserable he was dealt a bad hand at birth and now he spent his life in dead-end jobs working in horrible monotony.

Which by this point had turned him rather bitter and apathetic. Unpleasant experiences like this were standard on the job and didn’t faze him at all, in fact, he basically forgot about it as soon as the next driver in line pulled up the toll collector looked at the next driver with dead eyes and said $1.50.

The male driver in the next car took a dollar from his wallet and scrambled his car for 50 cents having not originally realized that the toll was more than $1.

The toll collector visibly rolled his eyes and audibly exhaled, while the driver frantically looked in the car compartments that would normally have change, then the collector said: “yeah maybe next time be ready huh shithead”.

The driver looked up at the collector and thought “What’s wrong with you? I should beat the hell out of you talking to me like” that the driver had just gotten in a fight with his girlfriend and was fully ready to take it out on someone.

The driver imagined getting out of his car and punching the collector in the face then he thought to himself maybe he’s having a bad day, maybe something’s wrong, maybe something horrible has happened to him recently, maybe he’s not normally like this then the driver found two quarters in the bottom section of his car’s front console and handed the money to the collector.

“Have a good rest of the day man” the driver said sincerely, nodding his head with a slight smile before driving off. Of course, the driver was wrong, it was a normal day for the collector and nothing was going any worse than any other day. This interaction cost him exactly one dollar and fifty cents no more no less.

See also  10 Harsh Truths Many People Are Afraid to Admit

How does SpaceX make money?

19 things you should do at least once in your lifetime.