The Power Of Silence – 5 Advantages of Being Silent 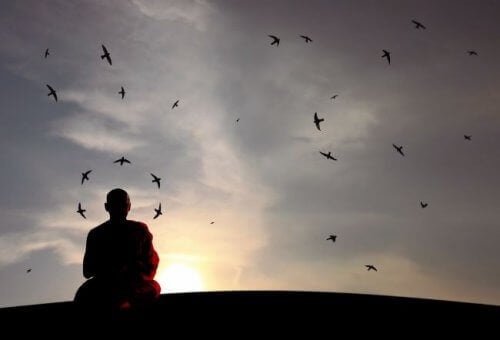 Law #4 always say less than necessary. If you read Robert Greene’s 48 laws of power, you most likely heard of this. This article goes in-depth about the 5 advantages of being silent.

Quick disclaimer – There are times where it is unwise to be silent as it can arouse suspicion but when done right, it is highly beneficial.

Contents show
1. You appear more powerful.
2. You will learn to read people.
3. Once words are out, you can’t take them back.
4. You will be a great listener and people will love talking to you.
5. Silence is a great negotiation tool.

Powerful people impress and intimidate by saying less. The more you say, the higher chance you have of looking like a fool. If you hear someone constantly talking about how great they are, you would think they are a narcissist or full of crap.

Louis the 14th would always have his courtiers tremble in fear when delivering bad news. He would always say I shall see and follow it with intimidating silence.

This was a very powerful man and his silence was one of the foundations of his power. Although you might not be a king, you can still use silence to appear more powerful.

What you say will mean more and carry more weight when you say something if you are often silent. People will often find you unpredictable and hard to read and thus be more drawn to you.

2. You will learn to read people.

If you are often silent, you will often be listening and observing others. You can spot liars and see through people’s true intentions because they might slip up trying to fill the silence.

When you are silent, you have the opportunity to read someone’s body language and see if it matches the words they are saying. Over time, you can start to notice trends and can start reading people based on a few observations.

The power to read someone is a powerful skill you can learn by being silent. The information you can get from reading someone is powerful and you can use it to make someone more or less uncomfortable depending on your intentions.

3. Once words are out, you can’t take them back.

You don’t want to say something you will regret. Silence is a great way to help with self-control. Sometimes, your superiors might mistreat you and you want to lash out at the moment.

You might feel satisfied at the moment after lashing out but it is not worth the price to pay in the future.

Serving your ego only takes you further away from the things you want in life.

Hold your tongue, calm down, and then respectfully hold your ground. Make sure you have a strategic response rather than just vent your emotions.

Even if your superior is in the wrong, venting your emotions can make the situation worse. Address the situation properly and make sure they make it up to you. If you are often mistreated though, you should consider leaving.

4. You will be a great listener and people will love talking to you.

If you read Dale Carnegie’s how to win friends and influence people, you might remember the story of dale talking to a florist at a dinner party.

See also  8 Signs You're Actually Boring And Don't Know It

Dale was mostly listening to the whole time while the florist would talk on and on. At the end of the party, the florist would go on to tell the host that dale was one of the best conversationalists he ever spoke to.

Dale got praised for being silent most of the time and you can replicate the same situation. People want to be heard and understood.

By being silent and listening, you will make the other person feel good as they are speaking. If you are comfortable talking less and listening more, you will appear more charismatic.

5. Silence is a great negotiation tool.

In negotiations, both parties want something from the other. Long-drawn out pauses are awkward and uncomfortable for both parties. If you can be comfortable with the silence, you will have the upper hand in negotiating.

It is human nature to fill the void of silence so the other side will get nervous and can cave into what you want. The silence will make it appear that the other party needs you more than you need them.

You can also use the silence to plan out what you want to say next. If you end up talking a lot instead, the other side can see that you might be nervous and they will have the upper hand in negotiations.

You don’t want to be giving too much information away because it can and will be used against you.

Are you someone who talks a lot or someone that is more silent? Let me know in the comments.

How to Manage Your Money (Only 5% Know This)

How to Overcome Self Doubt – Secrets to Believing in Yourself