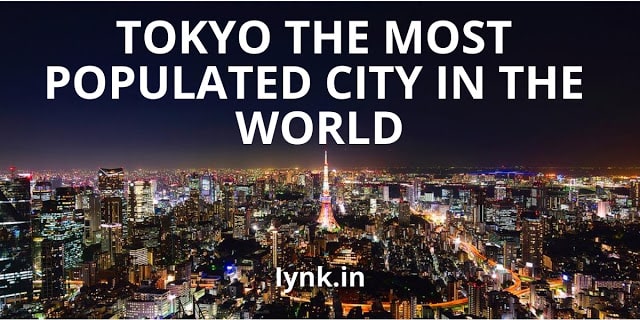 In today’s we are specifically going to talk about Tokyo and to be more specific about Tokyo’s population. As you might know about this city, Tokyo is one of the most populated cities in the world. It is like 18 times of whole Japan, yeah that’s amazing. Being said that let’s continue with today’s article.

As of 2019, the world population has climbed to around 7.3 billion people and is expected to reach 10 billion people by 2050. There’s a steady increase in Europe and the United States, while the Middle East, Asia, and Africa are expected to grow even more in the future. But where are the most densely populated places on the globe?

Metropolitan areas with a population of over 10 million are called megacities, and currently, there are 37 of them dotted around the planet. Included in this number are Tokyo, Osaka, and Nagoya, Japan’s three biggest cities. While Japan is currently experiencing a decline in the population overall, Tokyo is an exception and keeps growing, boasting the largest number of people of all the cities in the world. It is expected that Tokyo will also be an area with the world’s highest population density in 2030. Japan’s capital of Tokyo indeed already is the largest urban area worldwide with a population of more than 38 million people, including the adjacent Kanagawa, Saitama, and Chiba prefectures.

Now, which areas inside of Tokyo are the most densely populated? When it comes to comparing the size of Japan’s prefectures, Tokyo is only on place 45 out of 47 with 2,191km2. However, its population density of 6,263.97/ km2 is astoundingly high! Of the entire population (13.75 million people), the inner 23 wards account for about 70% of all people with about 930.000 inhabitants.

Compared to other municipalities, islands, and so on, that is an overwhelmingly large number – actually, 7% of the entire the population of Japan lives in Tokyo’s 23 wards.

The most popular among them are Setagaya, Nerima, and Ota. These wards are particularly spacious are close to office areas such as Chiyoda and Minato. That makes them a popular choice for people who work there, and they seem to have the status of commuter towns.

The population density is particularly high in Toshima. It’s where Ikebukuro is located, a bustling downtown district that is as popular among young people as Shinjuku or Shibuya. Second and third place goes to Nakano and Arakawa.

Looking at daytime only, Minato Ward has the highest population, followed by Setagaya and Chiyoda. Both Minato and Chiyoda are known as Japan’s most prominent business districts, so plenty of people work here during the day before going back to their homes in the evening. Setagaya is the most populous of Tokyo’s 23 wards.

<Wards with a high population>

In Tokyo, the Japanese capital, the climate is temperate, with fairly mild, sunny winters and hot, humid and rainy summers. Like the rest of Japan, the city is affected by the monsoon circulation: in winter, the northwest cold currents will prevail, while in summer, they will be replaced by hot and humid currents of tropical origin.


The the city overlooks the sea, in the bay of the same name. Given the relatively low latitude (we are on the 35th parallel) and the protection given by the mountains (we are on the east side), in winter, the currents of Siberian origin are felt little, so there’s a good number of sunny days, and it’s usually not very cold. However, cold and windy periods, with highs around 5/7 °C (41/45 °F) or less and possible snowfalls, can not be ruled out. In any case, night frosts are rare and usually light.


In summer, there can be hot and muggy periods, with sunshine, highs around 35 °C (95 °F), tropical nights, and high humidity. In other periods, there’s bad weather, with wind and rain, and sometimes (especially in June and July), nights are a bit cool. August is the hottest month, both because of the thermal inertia of the sea and because of the lower frequency of periods of bad weather.

If you find “Tokyo. The most populated city in the world.” helpful then please let me know in the comments