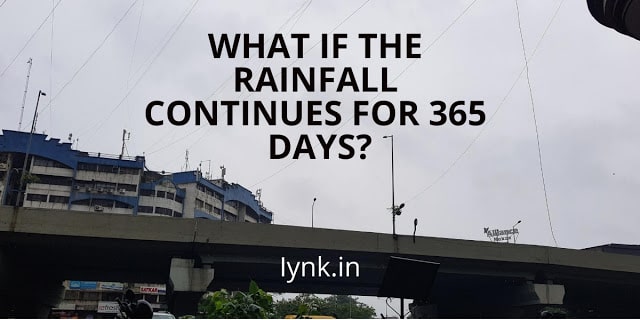 Ever wondered that what if the rainfall continues for straight 365 days?. Well, to be honest, it might sound silly. But just for the sake of curiosity, we’ll try to find out in today’s article.
Let’s say for an example Rain in Gujarat or to be more specific rain in Surat was continuously falling for straight 4 days with just some little brakes and that’s all. That almost resulted in the flood. Why so? even Surat is the city where all the gutter lines are connected with sea and rivers, that water should have vanished, isn’t it? but wait, here we are talking about heavy rainfall. Heavy rainfall can create some real disasters. So, first of all, let’s see what a heavy rainfall can result in?

You might have heard about the incident that took place in Kerala, On 16 August 2018, severe floods affected the south Indian state of Kerala, due to unusually high rainfall during the monsoon season. It was the worst flood in Kerala in nearly a century. Over 483 people died, and 140 are missing. About a million people were evacuated, mainly from Chengannur, Pandanad, Edanad, Aranmula, Kozhencherry, Ayiroor, Ranni, Pandalam, Kuttanad, Malappuram, Aluva, Chalakudy, Thrissur, Thiruvalla, Eraviperoor, Vallamkulam, North Paravur, Vypin Island and PalakkadChellanam. All 14 districts of the state were placed on red alert. According to the Kerala government, one-sixth of the total population of Kerala had been directly affected by the floods and related incidents. The Indian government had declared it a Level 3 Calamity, or “calamity of a severe nature”. It is the worst flood in Kerala after the great flood of 99 that took place in 1924.

Thirty-five out of the fifty-four dams within the state were opened, for the first time in history. All five overflow gates of the Idukki Dam were opened at the same time, and for the first time in 26 years, 5 gates of the Malampuzha dam of Palakkad were opened. Heavy rains in Wayanad and Idukki have caused severe landslides and have left the hilly districts isolated. The situation was regularly monitored by the National Crisis Management Committee, which also coordinated the rescue and relief operations.

Just think about it, If a heavy rainfall can cause such a severe incident then what will happen if rainfall continues 365 days?

So, before starting let’s just first decide a good city for such natural calamity, In my opinion, I can only think about Mumbai, just because for your reference as Mumbai is one of the most popular city almost every person know no matter if you are from other countries, at some point you might have heard about it or you might know about this place right? ok then let’s begin.

The rain has just started, after a crapload of summer everyone is feeling relief. You can feel the happiness surrounding everywhere. From the neighbors next door to the whole locality ultimately the whole city. Everybody is discussing rain, it’s benefits and beauty and whatnot. People in the offices now started feeling a little lazy trying to skip some work, every now and then tries looking outside is rain falling or not. And everything is just looking perfect at that moment.

Everybody is cheering for the rain. It’s all cloudy up there. All you can see is dark big clouds. Even in the mid of the day, you can feel like its evening already. What a beautiful scene isn’t it?. It’s been two and a half days and the rain is not stopping. Some unemployed (XD), kids and various other people are enjoying the rainfall by going parks or getting just getting wet on the streets. And some little difficulty started with the professional people like unable to reach the office on time, busses started running late. Well it’s just not that big problem, isn’t it?


You can also read: Why is the sky blue?


Now it started little bothering people. Kids going to school are not going anymore because their parents must have not sent them or their school must have closed as rainfall is not stopping. And if we look at professional guys, it’s getting difficult every day like traffic on the roads have increased
Busses are running later than ever. Some are reaching the offices and some are unable to make it through.

See also  How to loose weight in 7 days?

Now the effects of the heavy rain are getting visible. Streets and roads started gathering water on the sides, difficulties for commuting is increasing. As it is the 14th day of rainfall than it is obvious that the weather reports are clearly suggesting alerts. Like, don’t go outside the house. All schools are closed now. All markets and shops in Mumbai are closed people started staying at home preferring not to go outside. But still, people aren’t that much afraid of the rain until now. These guys are still taking this rainfall casually.

Days are passing by and the rain isn’t stopping or not seems like it is gonna stop. Everybody’s heart is now in terror, blood has started getting cold. People are rushing to other cities, towns, and villages. News channels and social media are flooded with live updates and various other reports regarding the flood. Slums and other low-quality build houses started getting collapsing.

That’s almost 3 months of rainfall. This number is far from Kerala’s total rainfall duration, almost half of the city is underwater and the scenario looks devastating. Streets are flooded with water, the whole city has completely shut down. The rescue team is working 24×7. And the whole world’s eyes are on this phenomenon. BSE’s (Bombay Stock Exchange) networking system is completely down, even 3 hours of BSE system halt can result in millions of dollars loss then you can imagine how interrupted is the nation’s economy right now.

See also  How to overcome the fear of the audience ?

The city is now empty. The Arabian sea has taken over the whole city, Skyscrapers collided, many people died, many families fell apart. Various nearby cities and towns got seriously affected by the flood. No one has never ever seen such a disaster. Various campaigns regarding the flood were able to generate a lot of money from all over the world to help the victims of the flood. And now let’s wait for the rainfall to stop.

Miraculously clouds started moving away from each other, little sunlight is now visible in the sky.
As said earlier sea has eaten up the whole city, all you can see from the helicopter is just water all around, only the high rise buildings and skyscrapers are half visible. A few days ago when water started draining out, all you can see is the leftover of destruction, scraps of collided buildings, rotten cars, and other vehicles.

You can also read Biggest Scam on Telegram

So, this was all a fictional story and the product of my wild imagination. I hope you enjoyed reading “What if the rainfall continues for 365 days?” if so then please let me know in the comments and stay tuned for more.