Contents show
What If There’s No Internet for 24 Hours?
Morning chaos
It’s better to take the day off
Are all the memories lost?!
The social media market is collapsing…
Panic in major cities
Scary thought
Weird evening 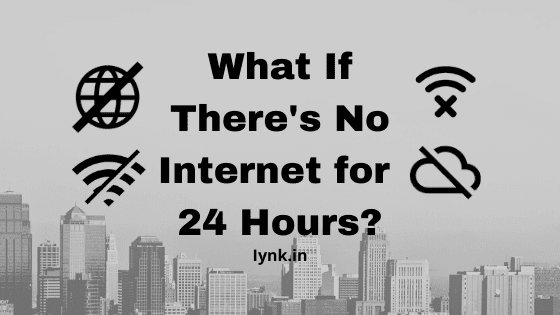 Ever imagined What If there’s No Internet for 24 hours?. Imagining a world without the internet is impossible these days. My intense curiosity led me to research everything that could go wrong if the internet is not working. To summarize each and every problem that could arise because of “No Internet Connection” I’ve made a Story. So, let’s find out what will happen If there’s no internet for 24 hours
It’s 7am, and the sound of your alarm wakes you up. You reach over to the nightstand to pick up your phone. With your eyes half-closed, you notice you don’t have any new notifications. “Hmm, that’s weird.” But mostly, you’re more concerned with getting some coffee in you first!
So, you get up, grab a quick shower, and head downstairs. After you’ve gotten some breakfast and coffee, you grab your tablet and see the same thing: no notifications.
You also notice there’s no Internet connection. It wasn’t just on your phone but all your devices. Before checking your router, you try the old fashion’ “turn it off and on again” technique. Of course, that didn’t help. So, you head over to the router and see a blinking red light. The 4G isn’t working either.

“Ugh, great. Gonna have to call the service provider.” …Eventually. For now, it’s 7:45, and you’re already running late for work. You decide to take a cab – maybe it’ll save some time. You automatically open the app on your phone. Oh yeah, it doesn’t work. No connection.
“Could this day start out any better?” you think sarcastically to yourself. So, you run to the nearest bus stop, which is about 20 minutes away. 20 minutes that you really don’t have right now. Winded, you get to the stop only to see the timetable screen blinking “NO SERVICE.” Now, that’s either because they can’t track the buses and the servers can’t access their schedule, or because there aren’t any today, to begin with.
You notice the people around you for the first time. They’re all looking at their phones in frustration, some have even struck up a conversation. Nobody has the Internet… That’s the first moment when you feel the panic rising in your chest.
“If it’s not just me, then it could be serious…” You spot a cab a few feet away and hop in. But GPS obviously isn’t working, and there’s mad traffic on the road – even with all the signs around to help! Horns are beeping from every direction, and it’s as if the chaos is getting worse right before your eyes as you stare out the backseat window.
When you finally get to your office building, the cab driver’s voice almost jolts you. “$16.50!” You reach for your card without even thinking. But guess what! That doesn’t work either. So, you have to dig in your wallet and hope you’ve got some cash on you. You have a 20. Yes! At least some luck!

It’s better to take the day off

It’s almost 8:30 – yep, you’re half an hour late. Everyone else is already there when you walk into the office. Right from the get-go, you’re already not that surprised to hear the talk of the day, “Internet’s down.” Someone’s talking about the stock market is at a standstill.
Another is talking about how hospitals everywhere are struggling to access medical records since everything was online. You head over to your desk and sit down to start your computer, wondering if you should’ve bothered coming to work in the first place.
You can’t send any emails or reports, and you can’t download anything. With impatient clients ringing everyone’s phone off the hook (because their Internet and emails are down too), you and your coworkers bust out the old dusty fax machines to send and receive documents.
The only problem with that is there aren’t enough fax machines for everybody! That’s when you notice another problem: with the whole world calling each other on their landline phones, they’re overloading communication systems – to the point that you can’t reach anyone.
It’s almost 10am, and everybody’s up by now. With the office becoming more of a circus with every passing minute, the boss decides to let everyone just take the day off. Hopefully, things will be back to normal by tomorrow…
It’s close to 11:15 in the morning. Traffic is still congested, but there’s no point going home and just staring at the wall. So, you walk around until you find a place to grab some lunch. You can’t remember how much money you have in the bank, and there’s no way to check. Both your credit and debit cards are now useless pieces of plastic.

Are all the memories lost?!

So, you take a 10-minute walk to your local branch. On the way, you hear people’s theories on what happened. Some are talking about a global cyber-attack, others are talking about something happening to the satellites. That’s when it hits you: what about all your pictures, videos, and data?
You had your whole graduation video on the cloud. All those pictures of your backpacking trip across Europe? Are all the memories lost? You feel your heart racing. It’s both your fast-pace walking and the thought of losing all those precious records of the best moments of your life…

The social media market is collapsing…

On your way, you stumble across a newsstand. All the papers are nearly gone – you grab the last one. The headline reads: “THE END OF THE INTERNET!” You read briefly that social media companies have already lost billions, and the market is collapsing.

You get to the bank at 11:45. …You and everyone else. There’s a line extending outside the entrance. You take your place at the end only to hear the faint sound of the teller announcing, “We’re about to run out of cash, you’ll have to come back tomorrow.”
Luckily, your turn comes right before they start sending people away. You take 400 bucks out of your account to keep yourself afloat. Who knows if it’ll be enough – there’s no way of knowing how long this nightmare will last! As you step outside, someone runs and snatches a guy’s wallet from his hands.
People are already getting desperate, and thieves are taking advantage of the situation. You quickly hide your money in your front pocket. It’s 12:30, so you head out for lunch. Most places have hung handwritten signs on the door: CASH ONLY. Well, good thing you made it to the bank.
You find a diner and notice they’ve got the news on the TV hanging in the corner. There’s no Internet across the ENTIRE globe! Airports are at a standstill, along with ships, trains, and commercial trucking. Panic has broken out in major cities. That’s when you remember your folks should be flying home from their vacation in Ireland!
You try to call them – no answer. You have no idea if their flight was delayed or canceled – how can you get hold of them?! “It’s fine, they’re ok. Hey, who wouldn’t wanna be stranded in beautiful Ireland?” For now, you’ve got other things to worry about.
You need to stock up on food just in case this Internet thing lasts longer than anyone expects…or is ready for… It’s 2pm, and the streets are packed. It looks like everyone else has also taken the day off work. You naturally start heading to the nearest supermarket, but you figure it’ll either be chaotic or just closed since their POS systems need an online connection.
And big places like that aren’t about to bust out the pen and paper to keep track of sales. You ask a passerby if there are any little family-owned stores in the area. You would’ve just googled that before, now you have to talk to someone! You take the woman’s directions and find the place. They don’t have a lot, but you grab whatever you can carry in two hands and head home.

As you walk, you start thinking about how everything you do revolves around the Internet. You scroll for hours through your social media feed, you watch everything on YouTube or streaming services, you have cable TV, but you rarely watch it. You feel so isolated not having heard from any of your friends…

You finally get home at about 4pm. You know it’s a waste of time, but you check the router anyway. Still no Internet. Since you can’t stream anything, you decide to watch good old-fashioned TV channels filled with old movies and shows.
What a feeling! Granted, you won’t be able to google the actors or any spoilers, but that’s the joy of it! The commercial breaks, not so much… At about 6pm, the phone rings, and it’s your parents.
They’d been stuck at the airport all day only to see their flight being delayed further and further until it was finally canceled. They’ve just settled into a hotel for the night with plans of flying out in the morning. But at least they’re ok! And you don’t make it much longer yourself.
After a hectic day, you’re ready for bed. At about 10pm, you fall asleep to the thought that you’ll face the same chaos tomorrow, and you’re already stressed about work. It’s 3:15 in the morning. You wake up to multiple notification sounds on your phone, and as you turn over, your screen is flashing with pop-up boxes left and right. Phones all across the city – across the globe! – are lighting up as if on command.
You take a look and let out a sigh of relief: the world is back online! Phew!
If you enjoyed reading “What If There’s No Internet for 24 Hours?” then please share and do comment about your thoughts on this. You might see a bell icon on the left bottom side of your screen (If not simply open iynk.in in any browser), just click on it and subscribe for more future updates and important feeds. Stay informed @Information You Need to Know.


Worth Reading Articles
1. 20 Psychological Tricks to Try on Your Friends
2. The Pareto Principle – Do more by doing less – 80/20 Rule
3. Best productive podcasts that you can listen for free.
4. Stoicism: Everything you need to know.

5. 59 Small Business Ideas that can be Started in very Little or No Time