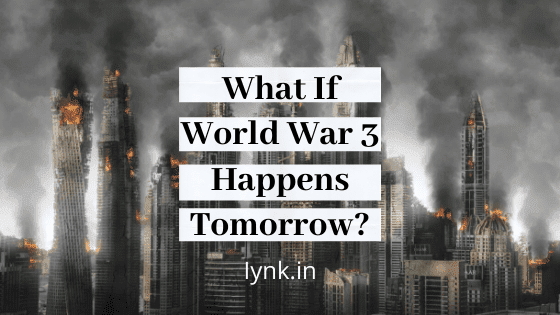 What If world war 3 happens? or What if world war 3 happens tomorrow? Human history has been full of battles and wars some big and some small. But if World War III were to happen. It might be Humanity’s biggest battle yet. Advanced technology, massive troops, and many more intensive strategy would all be involved.
But why would Something like this happen? What countries would join in and how would this war be fought? Welcome and here’s

What would happen if we had World War three?

People have talked about possible world war three for decades. It’s almost started in the 1960s during the Cold war between Russia and the United States. But thankfully we managed to avoid that. But let’s say we aren’t lucky enough to avoid it next time then when might World War 3 happens.

What Reasons could start a World War?

Talking about it like this makes the chances of a war happening sound likely but the chances are actually a lot lower than you think. Since 1945 the world has seen many different battles. Vietnam, Afghanistan and dozens of different Civil Wars.
We should keep in mind that in order for a World War to happen, It needs to involve the entire world and the structure of the world is changed even more since 1945.

Countries simply aren’t as closely Allied as they used to be. Militaries are even stronger more skilled than they were as in previous world wars. It’s most likely that Millions of people would die and the Earth would take decades if not centuries to recover.
Especially with some of the weapons and tools, the countries would be using in today’s age. Soldiers on the ground might have exoskeletons. These are Metal Frames around the Soldier’s body that augment their strength.
Although this probably won’t turn them into RoboCop. It would make it easier for soldiers to carry heavy equipment over long distances.
Weapons that can bend around corners might also be a possibility and instead of seeing the war fought in the sea or the sky it could actually be fought in space.
Militaries could fight over weaponized satellites that could affect what’s below them. Although a lot of this stuff sounds like something out of a sci-fi movie. We should keep in mind that these weapons are scary and hopefully no one will ever need to use them.
Afterall things like this are meant to kill people but there may not be many soldiers on the ground. The war of the future might be fought on computers, drones, artificial intelligence, and robots could be the only things on the battlefield. There’s also a chance that acts of war in the future might not involve any violence at all hacking into other country’s computers as well as power grid shutdowns are all a possibility.

What would this war be about anyway?

It could have to do with resources specifically water. Since freshwater is such a scarce yet valuable resource, nations may begin to fight over it as it continues to deplete.
Hopefully, World War 3 won’t go on forever. So how could it end? Well, one reason and the main reason why a World War hasn’t happened yet has to do with these things, during World War II the United States dropped nuclear bombs on Japan killing over 100,000 people the cities involved took decades to recover.
Nukes used in World War II would pale in comparison to the modern nukes we have today. Oh, and by the way, there are nearly 14,000 nuclear warheads around the world held mostly by America, Russia, and China. A nation can have all the resources people and strategy they want but if a Nuke gets dropped on them, then it’s game over and if one country drops a nuke what’s to stop another country from doing the same and then another and another and soon the world would be destroyed.
So who would win this war? Absolutely? No one. a full-on World War 3 would have a massive impact on the world as a whole it’s safe to say that the world would never be the same. but try not to lose sleep over this after all a third world war like this with dozens of countries involved is incredibly unlikely to start tomorrow.
If two countries get into a fight, it’s more likely that other countries that aren’t directly involved will stay that way and let the other nations fight for themselves. Wars are terrible, let’s try to avoid them.
Worth Reading Articles
1. Only 1 Gram Of This Material Is Worth Over 💰 25 Billion Dollars. But Why?
2. The Pareto Principle – Do more by doing less – 80/20 Rule
3. 12 Easy Life-Saving Tricks That Will Save Your Life One Day
4. 10 reasons why meditation in the morning will change your life.
If you enjoyed reading “What If World War 3 Happens Tomorrow?” then please share and do comment about your thoughts on this. You might see a bell icon on the left bottom side of your screen (If not simply open iynk.in in any browser), just click on it and subscribe for more future updates and important feeds. Stay informed @Information You Need to Know.
Post Views: 358
See also  10 Fitness Trackers To Buy In 2022 (Updated)

How To Learn Faster 10 Simple Tricks