Contents show
Why Planes Leave Trails in the Sky? 15 Q&A About Airplanes
1. Why Can’t Planes Fly when it’s Extremely Hot?
2. Can a Plane Fly on One Engine?
3. Do Plane Oxygen Masks have Only 15 Minutes of Air?
4. What Are Those White Spiral Marks On Airplane Engines?
5. Is there the safest seat on an airplane?
6. Why are their Black Triangles Inside a Plane’s Cabin?
7. Why are Airplane Windows Round?
8. Why does the Planes Food Taste Bad
9. Is it possible to avoid turbulence
10. Why do your Ears Pop During Flying?
11. Are Planes Tray Tables the Dirtiest Things on Board.
12. What Citizenship Does a Baby Born Onboard Get?
13. Why are Most Planes White?
14. Why are there No Parachutes Onboard? 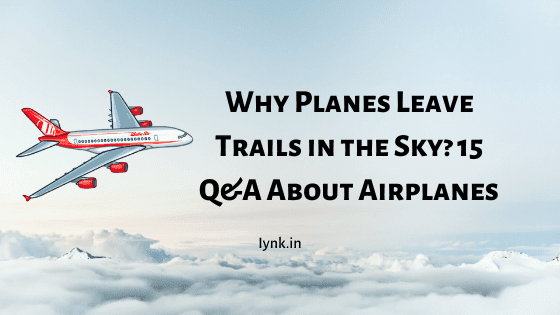 Ok, here’s a little riddle for you they’re long white and you can see them in the sky. what is it I used to think it was old man winter farts. but no. if you answered contrails from a jet then you’re the winner.
But what causes them lets find out. Ever noticed how on a cold day you see your own puff of breath when you exhale the exact same thing happens to a plane. The temperature at 25,000 feet or higher which is cruising altitude is really low around -30 degrees Fahrenheit.
While the engine burns the fuel it releases different substances mostly water and carbon dioxide into the atmosphere. the cold air condenses and sometimes even freezes the hot exhaust fumes creating those whitetails which look a lot like smoke. that’s why they’re often called condensation trails or contrails. To give you an idea, planes like the Boeing 747 eject around 2 gallons of water every 3 seconds. that’s a lot of water to condense.
Ok, but why are these contrails sometimes long and sometimes short well this depends on the weather. Long contrails form in humid conditions while low humidity makes them much shorter and that’s how these white lines can help you predict the weather. If you see long contrails it might mean that a storm is coming.
If a plane leaves short lines then don’t worry: the weather will be good. even though traveling by plane is common nowadays these huge steel birds are still surrounded by secrets and myths that give birth to a lot of questions.

Hot air is less dense than cool air, this means the air molecules are spread further apart from each other so they come into contact with the plane’s wings less. As a result of its harder for a plane to take off. It needs a higher take-off speed which would require a longer runaway. Besides planes rely on different internal machinery and a good part of it already runs hot.
That’s why when the temperature is 120 Fahrenheit or higher the plane might be delayed since the possibility of overheating the electronics is dangerous.

Yes, it can. especially if it has one engine. Haha. Okay even though, thanks to technological improvements engine failures have become pretty rare they still happen sometimes due to damage.
However, losing an engine in-flight isn’t even considered a serious problem by pilots. This is mainly because planes that fly over oceans or for long-distance routes have special certificates that indicate the exact time they can operate safely with one engine. For example, the Boeing 787 can fly around 330 minutes without the second engine.

3. Do Plane Oxygen Masks have Only 15 Minutes of Air?

Yes, they do but that’s enough for an emergency. If the cabin is depressurized at a high altitude the passengers won’t be able to breathe so they use oxygen masks. At the same time, the pilot will start descending right away to get lower than 10,000 feet where its possible to breathe normally again. And this descent won’t take longer than 15 minutes.

4. What Are Those White Spiral Marks On Airplane Engines?

These spirals of different sizes and shapes are for the safety of the ground crew. The ground crew has to wear hearing protection so they can’t hear the roaring engines of a plane. But when they see the spirals swirling they know it’s not safe to approach the area. Also, these spiral marks help to tell which plane is about to take off if there are several of them on the ground.

5. Is there the safest seat on an airplane?

Most airlines claim that the safest seat is just a myth. But statistics of airplane crashes beg to differ. They say that this seat is at the back. If you happen to sit near the tail of a plane you’re about 40% more likely to survive a crash than those in the front. If you need a more specific answer it’s the middle seats in the rear section.

6. Why are their Black Triangles Inside a Plane’s Cabin?

These black stickers are located on about four windows in a cabin. Each of them is aligned with the edge of the wings. If a flight attendant believes there might be something wrong with the moving parts of the wings slats or flats they know exactly which window provides the best view to check them. Also, you should choose a seat between those triangles if you tend to get motion sickness. The plane’s center of gravity is at the wings so you’ll have a smoother trip.

7. Why are Airplane Windows Round?

Actually, at the beginning of the commercial flying era, they were square. But after some time airlines started flying at higher altitudes requiring the cabin to be pressurized. But the frequent pressurization and depressurization caused the window corners to deform and even break.
Turned out that round windows can withstand the pressure of cruising altitude much better. So square windows were soon replaced for good.

8. Why does the Planes Food Taste Bad

Apart from the fact that onboard you’ll get only defrosted dishes which lost a big part of their flavor the pressurization of the cabin is to blame. The air in the cabin might be drier than a desert literally. And this numbs a lot of your taste buds. Besides quite often the cabin air can cause your nasal cavities to swell making the food taste even more unappealing.

9. Is it possible to avoid turbulence

Turbulence is disturbances in airflow. The causes can vary; some by weather conditions some by cumulonimbus clouds which actually are also weather conditions. While it’s impossible for planes to steer clear of turbulence altogether pilots do a lot to lessen it by bypassing areas of heavy turbulence for passenger’s comfort. But if you’re a nervous flyer here’s a tip for you choose morning flights because the air is less bumpy at this time. Do you think flying is scary? let me know in the comments.

10. Why do your Ears Pop During Flying?

Ears pop because there’s a rapid change in pressure. When a plane reaches a cruising altitude or lands, there’s not enough time for the pressure inside the inner ear and the air pressure outside to equalize. And the air trapped inside your inner ear causes the eardrum to pop. If you don’t want ear-popping to turn into pain, try chewing gum or yawing to help your eardrums adjust faster. This is also the reason you’ll sometimes hear babies crying during the descent. They have a hard time equalizing their ears.

11. Are Planes Tray Tables the Dirtiest Things on Board.

Sadly tray table surfaces have eight times more bacteria than the lavatory flush buttons. Unfortunately, quite often cleaning crews don’t have enough time between flights to take care of everything properly. So don’t forget to wipe the tray table down with a sanitizing wipe and don’t let your food sit on it. By the way, seat pockets and seatbelt buckles are almost as dirty.

12. What Citizenship Does a Baby Born Onboard Get?

13. Why are Most Planes White?

First, because extra paint would add around 1200 pounds to its weight and the heavier the plane the more fuel it burns. Airlines simply don’t want to pay the extra money. Also, the white color keeps a plane cool by reflecting sunlight. And there are safety reasons: its easier to spot any cracks damage or oil spills on a white surface. Plus in case of a crash, the white fuselage will be able to attract the rescuer’s attention faster.

14. Why are there No Parachutes Onboard?

Putting one on and jumping out of the plane correctly is no easy feat. You probably wouldn’t be able to do it in an emergency situation. Training for skydivers requires many hours in which they learn all the details about handling a parachute and how to land safely. What’s more even the most experienced skydivers don’t jump from an altitude higher than 15,000 feet. On top of that adding just parachutes without helmets and supplemental oxygen for all passengers would mean making a plane 8,000 pounds heavier.

If you found “Why Planes Leave Trails in the Sky? 15 Q&A About Airplanes” helpful than please share and do let me know your thoughts about this in the comments down below. Stay informed @ Information You Need to Know.

Worth Reading Articles
1. 20 Psychological Tricks to Try on Your Friends
2. The Pareto Principle – Do more by doing less – 80/20 Rule
3. Best productive podcasts that you can listen for free.
4. Stoicism: Everything you need to know.
5. 10 reasons why meditation in the morning will change your life.
Post Views: 367
See also  10 Skills that Millionaires Master

1 thought on “Why Planes Leave Trails in the Sky? 15 Q&A About Airplanes”