Why some people move on easily after a relationship ends? 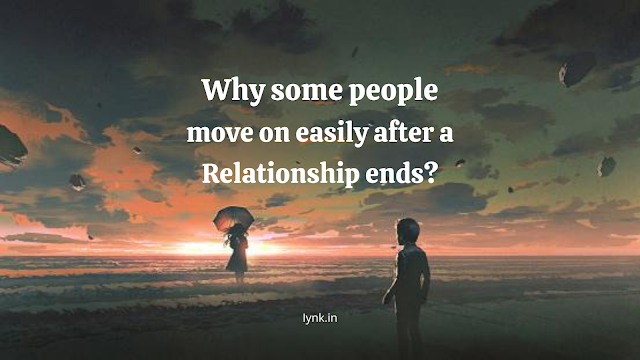 Two professors were in love when I was in college and their story was so popular among students. After some time, they broke up for some personal reasons. One married another woman within 6 months but the other one was still single.

We hear these stories so often nowadays. Here, I am not talking about a partner who cheats and moves on easily because for them you never really mattered and when someone doesn’t matter to you, you can easily leave them for no reason. Yes, it’s hard to accept but I think it’s true.

However, there are some people who really cared about their partner but they easily move on as I mentioned in the story I told you at the start.

There could be many reasons for them to move on easily. But what I think the most important one is.. THEY DID NOT FORGET THEIR DREAMS FOR SOMEONE, or I say… THEY DIDN’T LOSE THEMSELVES IN RELATIONSHIP.

When two people start a relation, they get so attached and the two start dreaming their future together. BUT sometimes one focuses on the dream they saw as a couple rather than chasing their own dreams. I think this is why some people lose their track while trying to join a path with someone.

The person for whom the dream of ‘being together for life’ becomes a priority finds it hard to move on when it ends. And these people lose themselves but the other one only loses a piece of themselves. Well, it’s easy to collect a single piece than collecting ALL PIECES.

But the thing is when love is all around you and each puts equal efforts to keep each other, then the word ‘BREAK UP’ will never appear in the first place. So, give a relationship efforts it may need but don’t forget to give yourself a push to go after your dreams.

Most important thing is to pursue our own dreams and the person who is going to stay will stay for life because for them moving on is never an option.

6 Gut Feelings You Should Not Ignore